Rashtrapati Bhavan, 7, Race Course Road and Parliament complex have together incurred energy bills to the tune of over Rs 16 crore in the last fiscal, which is Rs 2 crores more than their consumption charges for 2008-09.

"The combined electricity bill amount of the Rashtrapati Bhavan, Parliament complex and the prime minister's official residence is over Rs 16.33 crore," Chetan Kothari, a Right To Information petitioner said.

Kothari, who hails from Mumbai, had sought information regarding the units of electricity consumed and the amount of money spent towards electricity bills for the past four years.

"It is comparatively half of what has been the cumulative bills of the last two years," Kothari said.

The Parliament incurred an electricity bill of Rs 6.25 crore during 2008 followed by Rs 8.5 crore in 2009, revealed the RTI reply. 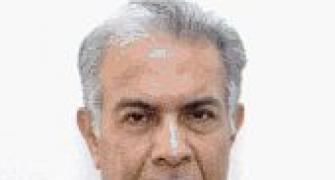 PM's health info can be withheld under RTI: CIC