Prime Minister Narendra Modi on Friday said the Centre has transferred around Rs 1,35,000 crore so far under the Pradhan Mantri Kisan Samman Nidhi (PM-KISAN) scheme with the payment of eighth instalment on Friday and is also procuring higher quantity of paddy and wheat at minimum support price to boost farmers' income. 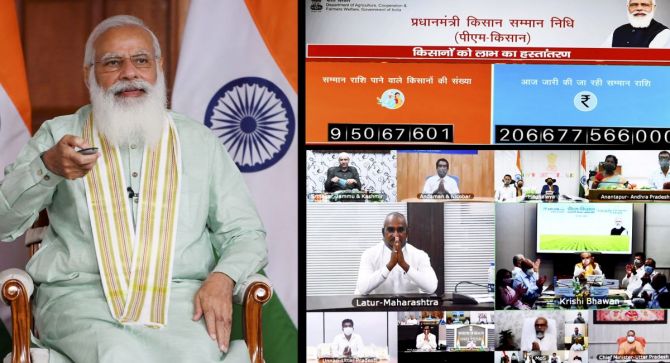 Out of the total amount disbursed since the launch of the scheme in February 2019, Modi said around Rs 60,000 crore has been transferred during the COVID-19 pandemic, which is helping farmers in these difficult times.

The prime minister on Friday released the eighth instalment of Rs 20,667 crore to more than 9.5 crore farmers under the PM-KISAN scheme via video-conference.

Under the scheme, which became effective from December 2018, the Centre provides Rs 6,000 per year to eligible farmers in three equal instalments of Rs 2,000.

Addressing the event, Modi said farmers have performed their duties even during this COVID-19 pandemic and helped the country achieve a record production of foodgrains and horticulture crops.

He said the PM-KISAN scheme was launched to help farmers, especially small and marginal ones, in meeting their input costs.

The Prime Minister said around 10 crore farmers have received the 8th instalment.

"To West Bengal farmers, the benefit has begun to reach for the first time. Today, lakhs of farmers in West Bengal have got their first instalment.

"Gradually when the names of farmers are sent to the Centre, the number of beneficiaries will increase," he added.

Overall, around 11 crore farmers have received around Rs 1,35,000 crore under the PM-KISAN scheme so far, Modi said, adding that about Rs 60,000 crore has been transferred during the COVID-19 pandemic.

"PM-KISAN is benefitting small and marginal farmers. In these difficult times, this money is helping these farmers a lot. So far under the scheme, about 11 crore farmers have got Rs 1.35 lakh crore in their bank accounts. There are no middlemen," Modi said.

The government is continuously making efforts to ensure benefits to farmers reach directly at a faster pace, the prime minister added.

"Despite COVID-19 challenges, record foodgrains and horticulture products have been grown. The government has also procured record rice and wheat at minimum support price from farmers.

Talking about procurement operations, he said the centre has purchased 10 per cent more wheat so far this year at MSP and added that around Rs 58,000 crore payment has been made to farmers directly.

"I am happy that lakhs of farmers from Punjab and Haryana for the first time are connected with DBT (direct benefit transfer)...," Modi said adding that Rs 18,000 crore in Punjab and Rs 9,000 crore in Haryana have been deposited into farmers' accounts.

He also mentioned that farmers of Punjab and Haryana are sharing their experiences on social media about how they feel to see money in their bank accounts.

Thousands of farmers, especially from Punjab, Haryana and Uttar Pradesh, are protesting at the borders of the national capital since November-end.

They are seeking repeal of three new laws and a legal guarantee to the MSP.

Modi said the government is continuously working to provide new solutions in agriculture. "Promoting organic farming is one such effort. Cost of production is less, good price one fetches in the market."

Within 5 km radius of the two sides of the Ganga, organic farming is being promoted so that chemicals used in farming do not enter into the river.

Organic farm products under the brand Namami Ganga is being promoted, he said.

To ensure cheap and easy loan, the government for the last one-and-a-half years is running a drive.

"Over 2 crore Kisan Credit Cards (KCC) were issued and farmers have taken more than Rs 2 lakh crore loans. Farmers associated in dairy, animal husbandry and fishery have also started getting the benefit of the KCC," Modi said.

Recently, the government has relaxed the repayment of loans through KCC keeping in mind the pandemic situation, he said.

"Farmers' role has been immense in this fight against COVID-19. In these Covid times, India is running a free distribution of ration, thanks to the efforts of farmers," the prime minister said.

Last year, the Centre provided free rations for eights months under the food law to over 80 crore people. It is again providing free rations for May and June, costing Rs 26,000 crore to the exchequer.

The prime minister asked states to ensure that free foodgrains reach to the beneficiaries.

Arvind Nishad from Unnao district, Uttar Pradesh, shared how he started organic farming on the riverbed of Ganga under the Namami Gange scheme, and even formed farmer producer organization (FPO) to market his produce.

Revistar Kharumnuid from Ri-Bhoi of Meghalaya also shared his story about taking benefits from the 'Mission Organic Value Chain Development in North Eastern Region' and starting not only organic farming, but also processing and marketing forming an FPO.

Patric from Car Nicobar, Andaman & Nicobar Islands, said that the better price that he began to receive after 14,000 hectares of farm land was certified as organic under the government's Large Area Certification Programme.

Khurshid Ahmed from Srinagar, Jammu and Kashmir, shared how after post graduation he started farming of exotic organic produce and then formed an FPO with 30 farmers. He said he was benefitting from several schemes including PM-KISAN.

Balasaheb Narare from Latur, Maharashtra shared how he was able to get a farm loan easily after he received the Kisan Credit Card last year.

"So far, 11.80 crore have registered under the scheme. 10.82 crore farmers have received the amount. Total amount is more than Rs 1.16 lakh crore.

"Today, more than Rs 20,000 crore will be transferred to over 9.5 crore farmers under the scheme," he said.