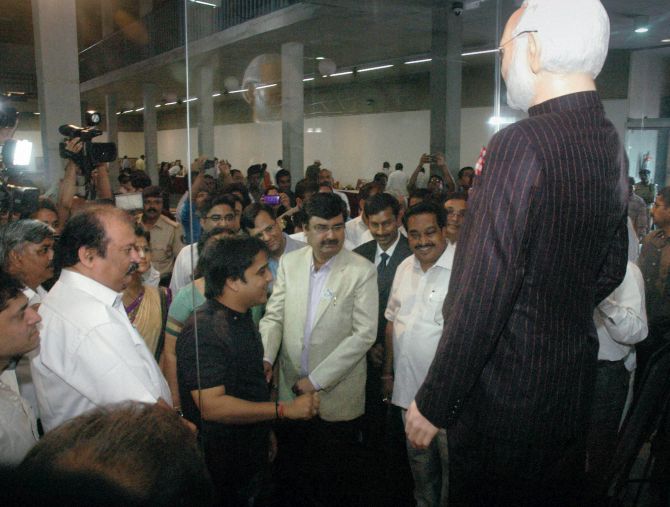 Up for auction were also two T-shirts of Modi including one gifted to him by Cricket Australia during his visit to Australia in November. The T-shirts were among 237 clothes and textiles items put for auction.

In all, 455 items that Modi had received as gifts during his nearly nine-month long tenure have been put for auction to generate funds for the PM’s ambitious ‘Clean Ganga Mission’.

Rajesh Juneja gave a written bid offering Rs.1.21 crore for Modi’s navy blue suit which was the star attraction at the  three-day auction which opened on Wednesday. Some reports said the suit had cost nearly Rs 10 lakh.

Juneja, who emerged as the highest bidder for the suit on day one, said,”I like Modi’s hardwork, confidence and that is why he is my role model. I want to keep the suit as a souvenir. If the bid goes up a little further, I will match it. But if it goes up steeply, then I will think about proceeding further.”

Earlier, NRI businessmen Viral Chowksi offered Rs 1.11 crore, while before him textile trader Suresh Aggarwal made an offer of Rs 1 crore for the two-piece suit.

The first bid was made for Rs 11 lakh by a Surat-based chartered accountant Pankaj, while few minutes later, second bid of Rs 51 lakh was made by Raju Agarwal, an estate dealer.

“I have offered Rs 1 crore. This is work of charity and when the PM is doing for a great cause like cleaning of Ganga, I decided to go ahead and buy the suit,” said Suresh Aggarwal. 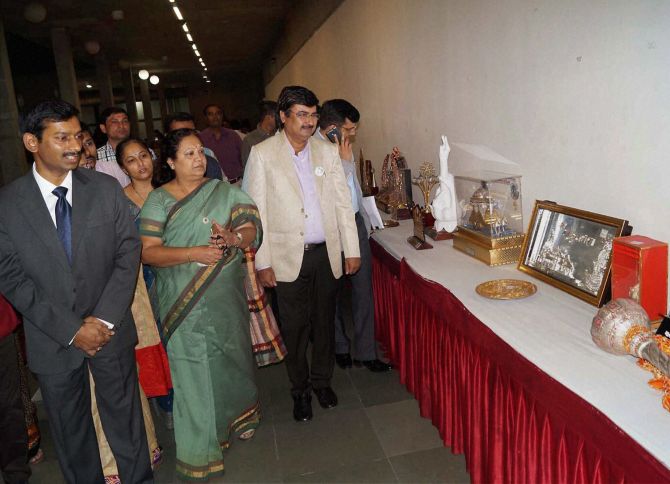 Giving a new dimension to the controversy, NRI Gujarati businessman Ramesh B Virani, who had participated in the Gujarat Vibrant Summit, said he had gifted the suit to Modi when had he gone to invite the PM for his son’s wedding.

“At that time, he (Modi) told me that he has a very busy schedule ahead and also that he will be donating the suit. I said there is no problem with that. I told him that I want him to wear the suit on the day of my son’s wedding as a blessing,” he said.

The suit created waves and also kicked up a political storm with opposition parties like Congress taking a swipe at the PM.

“Prime Minister Narendra Modi’s suit, that he wore during his meeting with President Barack Obama last month, along with other 455 items that he received as gifts during his tenure as PM is being auctioned at the three-day event,” said Surat Municipal Commissioner Milind Toravane.

The gift items belonging to Prime Minister Modi is a national treasure and the money generated from the auction will be utilised for the Clean Ganga Mission, he added.

The event was organised at SMC's Science Convention Centre at city-lights road in Surat as the PMO had decided to hold the auction in the city.

Modi during his chief ministerial tenure in Gujarat had initiated a trend to auction the gifts that he received in a year and it was donated to Kanya Kelavani Yojna for girl child education, he said.

He was photographed wearing the suit during his summit talks with Obama in Hyderabad House in Delhi on January 25 and at a joint media appearance that followed the meeting.

Photographs of the suit on a closer inspection showed that the stripes were actually tiny letters spelling out his name in full -- Narendra Damodardas Modi -- and embroidered on the fabric vertically down the stripe.

The suit had triggered a debate in social media while the PM was slammed by his political opponents for wearing an expensive suit. Senior Congress leader Jairam Ramesh called Modi a “megalomaniac”.

Discussions on whether the suit, which from a distance appeared to be a classic navy blue pinstripe design, was fine style and good form or a thinly-disguised show of narcissism coursed through social media, even attracting global media attention.

Tweets flew thick and fast, including comparison with former Egypt President Hosni Mubarak who is known to have a similar outfit.

Congress leader Ajay Maken said the auction was a “damage control” exercise by Modi who was “widely criticised” for donning such a suit.

“The PM made a mockery of the poor by wearing a suit like this...It showed how egotistic this person is,” he said.

“First, how can such an expensive gift be called a private gift? What exactly in return does the person gifting this expect? Secondly, there are rules and norms laid down in the statute over how gifts are to be disposed off. The PM cannot decide to just auction off the gift, nor can he decide where the proceeds of the auctions may be given. The statute states that the amount must go down to the government depository,” he said.

At the end of three days, the highest bidder will take away the navy blue suit. The suit was tailored by Jade Blue in Ahmedabad, the clothing chain that handles the PM’s wardrobe.

Surat City Collector Rajendra Kumar said the bidding will be closed on February 20 at 5 pm.