Congress leader Udit Raj's unseemly swipe at President Droupadi Murmu that she was engaging in "sycophancy" with her comments that most Indians eat salt produced in Gujarat drew a sharp reaction on Thursday from the Bharatiya Janata Party, which claimed the remark expose the opposition party's "anti-tribal" mindset. The National Commission for Women has summoned Udit Raj over his "sycophancy" remark against the president.

At a function recently, Murmu noted Gujarat manufactures 76 per cent of salt produced in the country. "It can be said that all countrymen eat Gujarat's salt," she had said.

The western state produces nearly 80 per cent of the salt consumed in India.

"No country should get a president like Droupadi Murmu. This is height of sycophancy. She says 70 per cent of people eat Gujarat's salt. Spend your life eating salt, then you will know the truth."

His remarks drew sharp reaction on social media, with many users noting the president's statement was true.

Hitting out at Raj, the BJP noted Congress leaders in the past also had made objectionable remarks about India's first tribal president.

"It is a matter of surprise and pain that Congress leaders are regularly using such undignified expressions. This exposes the party's anti-tribal mindset. The Congress should apologise," BJP spokesperson Sambit Patra said.

He recalled the unsavoury row triggered by Congress leader Adhir Ranjan Chowdhury earlier when he had used the term "Rashtrapatni" for the president.

Chowdhury had later termed it a "slip of tongue" and apologised to the President.

Besides Chowdhury's comments, he also recalled Congress leader Ajoy Kumar's "evil mindset" expression while referring to the BJP's choice of her as the presidential candidate.

"If the Congress was against this language of calling the highest Constitutional post holder a 'chamcha' (sycophant), will it sack Udit Raj? Will Rahul and Sonia Gandhi condemn this statement?" Poonawalla asked.

"It is unlikely they will as such statements are applauded by the Gnadhi family. The Congress had ensured the defeat of B R Ambedkar twice in polls."

"Droupadi Murmu ji rose through sheer hard work and commitment despite her challenging socioeconomic circumstances and became the people's president but the Congress cannot accept this," he said in his statement.

As the row over Udit Raj's comments intensified, the former MP issued a clarification, describing his dig on the President as his personal comments.

"My statement as regard to Draupadi Murmu ji is mine & has nothing to do with the Congress. Her candidature & campaign were in the name adivasi (tribal). It doesn't mean she is no longer adivasi. My heart cries that when SC/ST reach to higher position, they ditch their communities & become mum," he tweeted.

Meanwhile, the National Commission for Women summoned Raj for his "inappropriate and objectionable comments".

The NCW, in a notice issued on Thursday, asked the Congress leader to appear before it on October 10 and explain his "extremely condemnable and shameful" comments.

In the notice, the NCW said the commission has taken cognisance of his remark.

"The comments made are extremely condemnable and shameful. The Commission has sent a notice to Shri Udit Raj. NCW has scheduled a hearing and asked Shri Raj to appear before the Commission in person on October 10, 2022 at 3 pm," the women's body said in a press statement.

Before the summons was issued, NCW chairperson Rekha Sharma tweeted, "Highly objectionable statement against the Supreme power of the country and a woman who with her sheer hard work reached at this position. @Dr_Uditraj must apologise for his derogatory and insulting statement. @NCWIndia is sending him a notice."

Raj comes from the Scheduled Caste community and was elected to Lok Sabha on a BJP ticket in 2014.

He joined the Congress prior to the 2019 polls after the BJP denied him a ticket. 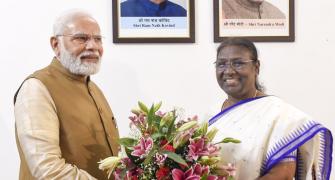 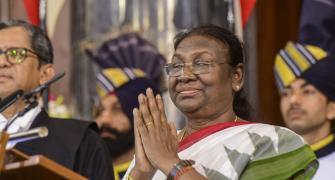