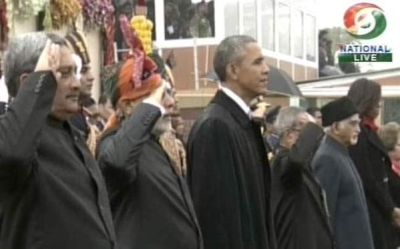 As a controversy broke out on social media over Vice President Hamid Ansari not saluting when national anthem was being played during Republic Day celebrations at Rajpath, his office on Monday issued a statement clarifying that this is not required as per protocol.

"As per the protocol, when the national anthem is played, the principal dignitary and persons in uniform take the salute. Those in civil dress stand in attention.”

"During the Republic Day Parade, the President of India, as Supreme Commander, takes the salute. As per protocol, the vice president is required to stand in attention," Gurdeep
Sappal, joint secretary and OSD to the vice president, said in a statement.

"When the vice president is the principal dignitary, he salutes during the national anthem, wearing a headgear, as done at NCC camp this year," Sappal added. Soon after the Republic Day celebrations, photos of President Pranab Mukherjee, Prime Minister Narendra Modi and Defence Minister Manohar Parrikkar saluting the tricolour and
Ansari not doing so went viral on Twitter.

As some launched a vicious attack on Ansari over it, a host of others reacted sharply saying that raking it up was "unnecessary and shameful".