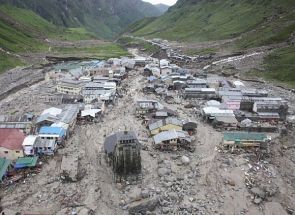 Over a month after calamity hit Uttarakhand, the state government has finally prepared a roadmap for clearing tonnes of debris left over by the destruction at Kedarnath and extricating bodies still trapped underneath the rubble at the Himalayan shrine and adjoining areas.

The roadmap was worked out at a meeting of GSI experts, Engineering Projects (India) Limited top brass and IAF officials with Chief Secretary Subhash Kumar and DGP Satyavrat Bansal in Dehradun on Saturday.

It was decided that the services of EPIL will be taken to carry out the massive exercise hampered so far by bad weather and lack of heavy equipment, official sources said today.

EPIL, which is said to have expertise in the field, will depute a dedicated workforce of 500 trained personnel for the exercise in which GSI and ASI will also be involved, Chief Secretary Subhash Kumar said.

The task is mammoth considering the huge quantity of debris containing big boulders lying at Kedarnath, Gaurikund and Rambada but with scientific expertise provided by the GSI and ASI the operation is likely to be carried out successfully by the EPIL personnel, he said.

Officials from the civil administration and police personnel will also assist in the exercise which also entails razing to the ground 48 dilapidated structures damaged by the June flashfloods in Kedar valley, the chief secretary said.

Heavy equipment like dozers, dumpers and rock breakers loaded in trucks have been despatched from Delhi for the purpose, EPIL CMD SPS Bakshi, who attended the meeting, said.

The heavy mechanical equipment will be dismantled on their arrival and transported in MI26 aircraft to Kedarnath where they will be reassembled before being put into service, he said.

Inclement weather coupled with lack of heavy equipment is posing a major hurdle to removal of debris from Kedarnath with a team of experts sent there earlier by the state government having returned without making much headway.