Right to protest is a fundamental right and cannot be termed as a 'terrorist act', the Delhi high court on Tuesday said while granting bail to Jawaharlal Nehru University student Devangana Kalita in a case related to the communal violence in north east Delhi during protests against the Citizenship Amendment Act. 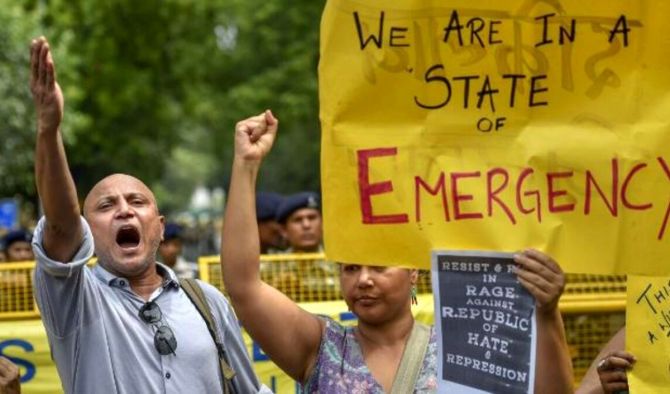 A Divison Bench said the court must be careful in employing the definitional words and phrases used in the anti terror law Unlawful Activities (Prevention) Act "in their absolute, literal sense or use them lightly in a manner that would trivialise the extremely heinous offence of 'terrorist act', without understanding how terrorism is different even from conventional, heinous crime."

It said it was constrained to say that in its anxiety to suppress dissent and in the morbid fear that matters may get out of hand, The State has blurred the line between the constitutionally guaranteed 'right to protest' and 'terrorist activity'.

"If such blurring gains traction, democracy would be in peril," a bench of Justices Siddharth Mridul and Anup Jairam Bhambhani said in its 83-page judgement while deliberating with the case and imposition of anti-terror law against Kalita.

It said right to protest peacefully without arms is a fundamental right under Article 19(1)(b) of the Constitution and has not been outlawed yet.

"Considering however, that the right to protest is a fundamental right that flows from the constitutionally guaranteed right to assemble peaceably and without arms enshrined in Article 19(1)(b) of our Constitution, surely the right to protest is not outlawed and cannot be termed as a 'terrorist act' within the meaning of the UAPA, unless of course the ingredients of the offences under sections 15, 17 and/or 18 of the UAPA are clearly discernible from the factual allegations contained in charge sheet and the material filed therewith," it said.

Kalita was arrested along with others in May last year under the stringent Unlawful Activities (Prevention) Act in connection with a case of larger conspiracy related to riots.

While dealing with Kalita's case, the division bench referred to its judgement in Tanha's case and said the phrase 'terrorist act' has been given a very wide and detailed definition in section 15 of the UAPA.

Referring to a Supreme Court verdict, the high court said that the extent and reach of a terrorist activity must travel beyond the effect of an ordinary crime and must not arise merely by causing disturbance of law and order or even public order.

"The Supreme Court says that the effect of terrorist activity must be such that it travels beyond the capacity of the ordinary law enforcement agencies to deal with it under the ordinary penal law," it said.

The high court said the intent and purpose of Parliament in enacting the UAPA and in amending it in 2004 and 2008 to bring terrorist activity within its scope, was and could only have been, to deal with matters of profound impact on the 'Defence of India', nothing more and nothing less.

"It was not the intent, nor purpose of enacting UAPA that other offences of the usual and ordinary kind, however grave, egregious or heinous in their nature and extent, should also be covered by UAPA, since such conventional matters would have fallen within Entry 1 of List-II (State List) and/or Entry 1 of List-III (Concurrent List) of the Seventh Schedule of our Constitution," the bench said.

The high court clarified that in the present case, it was not deciding if the protests, in which Kalita is alleged to have been involved, were within the constitutionally guaranteed right to assembly, or whether they crossed the limit of what is permissible under Article 19(1)(a) and 19(1)(b) and became non-peaceful protests.

"However, what we find is that, for one there is nothing to say that the Government had prohibited the protest in the first instance. What we know is that offences, if any, that are alleged to have been committed by reason of the protests having been turned non-peaceful, are subject matter of FIR Nos. 48/2020 and 50/2020, in which the appellant is one of the accused and in which the appellant has been admitted to bail and will face trial in due course.

It said, prima-facie, the high court was unable to discern in the subject charge-sheet the elemental factual ingredients that are a must to found any of the offences defined under section 15, 17 or 18 UAPA.

"In our view, the subject charge-sheet and the material filed therewith does not contain any specific, particularised, factual allegations that would make-out the ingredients of the offences under sections 15, 17 or 18 UAPA.

The bench said that no offence under sections 15, 17 or 18 UAPA is made-out against the appellant on a prima facie appreciation of the subject charge-sheet and the material collected and cited by the prosecution.

Pawan Kumar Singh
© Copyright 2021 PTI. All rights reserved. Republication or redistribution of PTI content, including by framing or similar means, is expressly prohibited without the prior written consent.