Right to Education: PM writes to lakhs of students across India

Marking the formal launch of a year-long campaign to launch the Right to Education, headmasters of 13 lakh primary schools across the country will be reading out a letter written by Prime Minister Manmohan Singh to their students, on November 11.

The message of Dr Singh, which is being translated into 14 Indian languages, is to encourage children, parents and 60 lakh school teachers to take extra efforts to realise the goal of RTE.

Called Shiksha ka haq (right to education), this is a first-of-its-kind drive in the history of social awareness campaigns in India. It involves over two lakh volunteers and hundreds of community-based organisations, who will participate in a door-to-door campaign till November 11 next year.

They will help 13 lakh elementary schools become RTE compliant by March 31, 2013, the deadline set for states to implement the law in letter and spirit.

Headmasters will kick off the RTE campaign by reading out the PM's message in the students' assembly, while Human Resources Development Minister Kapil Sibal will launch the programme officially in Mewat, Haryana.

Mewat is one of the country's most educationally backward districts.

The modalities of the campaign were finalised a fortnight ago by the RTE National Advisory Council, as it felt that the PM's involvement would give it a special edge.

"The PM instantly agreed. His letter is ready. We will start posting it now," said council member Vinod Raina.

He pointed out that this is the second time the PM has been associated with the cause. Earlier, he had dedicated the RTE to the nation in a televised address on April 1, 2010.

In a significant move, the advisory council decided to celebrate Education Day, on November 1, with students and teachers in Mewat instead of the high-security Vigyan Bhawan in Delhi. The day marks the birth anniversary of independent India's first education minister Maulana Abul Kalam. 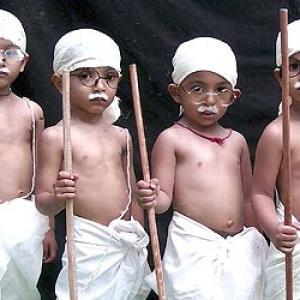 Right to Education: Why India has a long way to go