Actor Rhea Chakraborty's lawyer said after her arrest by the Narcotics Control Bureau on Tuesday that she was being hounded by three agencies only because she was in love with a man who was a "drug addict" and had "mental health issues". 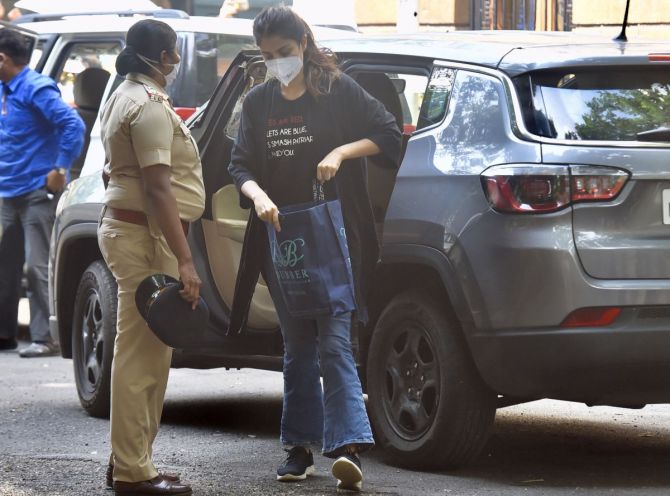 Chakraborty was arrested by the Narcotics Control Bureau in a drugs case linked to her boyfriend, actor Sushant Singh Rajput's death.

"This is a complete travesty of justice," said her lawyer Satish Maneshinde.

"Three central agencies hounding a single woman, just because she was in love with a drug addict and a person suffering from mental health issues," he added.

Rajput, who allegedly hanged himself at his Bandra residence in Mumbai on June 14, had been been treated by five leading psychiatrists in the city, Maneshinde claimed.

"But he ended up ending his life due to consumption of illegally administered medicines and (also) used to consume drugs," the lawyer said, adding that Chakraborty was prepared for the worst.

She is likely to be produced before a magistrate's court through video link on Wednesday.

Apart from the drugs case, she is facing an abetment of suicide case in connection with Rajput's death which the Central Bureau of Investigation is probing, and a related money laundering case being probed by the Enforcement Directorate.

Rajput's father who accused Chakraborty of abeting his son's suicide had also claimed that she siphoned off Rs 15 crore from his son's bank accounts.

The ED launched a probe into this aspect.

The NCB began a probe after Chakraborty's mobile phone chats allegedly revealed that she used to consume drugs.