Restrictions lifted from most parts of Kashmir 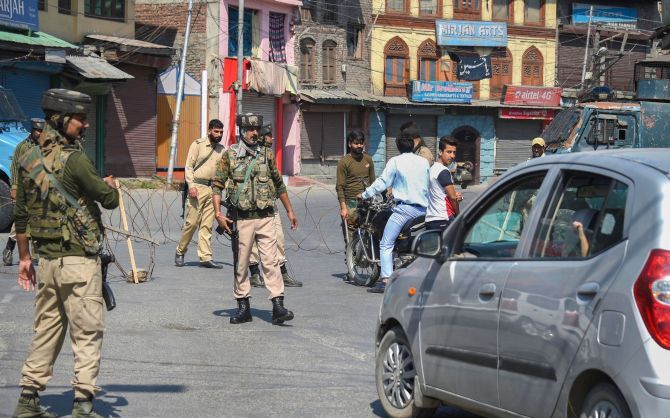 IMAGE: Though restrictions have been lifted, the officials said security forces continued to be deployed to maintain law and order. Photograph: S Irfan/PTI Photo

Restrictions were lifted from most parts of Kashmir on Wednesday and some areas in Srinagar city witnessed an increased presence of private transport leading to traffic jams but schools remained closed and public transport was off the roads, officials said.

They said few auto rickshaws and inter-district cabs were also seen plying in some areas of the city.

The officials said restrictions have been lifted from most areas of the valley, but security forces continued to be deployed to maintain law and order.

Restrictions were first imposed across the Kashmir on 5 August when the Centre announced its decision to abrogate Article 370 of the Constitution and bifurcate the state into two Union territories.

The restrictions were lifted in phases from many parts of the valley as the situation improved with passage of time.

Markets and other business establishments remained closed, while public transport was off the roads across the valley, the officials said.

The efforts of the state government to open schools have not borne any fruit as parents continued to keep children at home due to apprehensions about their safety.

Most of the top-level and second rung separatist politicians have been taken into custody while mainstream leaders including three former chief ministers -- Farooq Abdullah, Omar Abdullah and Mehbooba Mufti – have also been either detained or placed under house arrest.