Union home minister and Bharatiya Janata Party chief Amit Shah on Saturday dared Congress leader Rahul Gandhi to declare that his party will restore provisions of Article 370 in Jammu and Kashmir if voted to power. 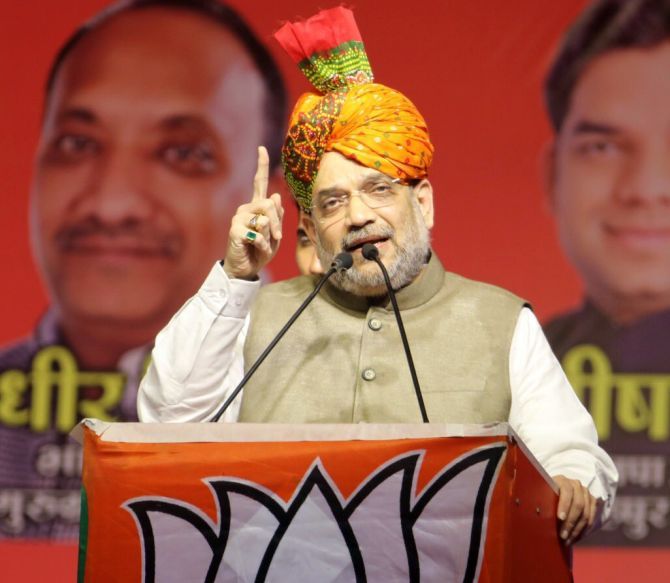 Addressing a rally in Maharashtra's tribal Nandurbar district, Shah said after Narendra Modi won the second term with a massive mandate in May this year, the first thing he did was to abrogate provisions of Article 370 which gave special status to Jammu and Kashmir.

"Due to the special provisions, Pakistan fomented terror in the state and over 40,000 people died. Development in Kashmir came to a standstill. But Congress was not ready to scrap the provisions. It was worried about its vote bank and not about the national interest.

"No PM ever dared to take the decision. It was Modi with his 56-inch chest who made the move," he said.

"Rahul Gandhi asks what is the connection between Article 370 and Maharashtra. I dare him to declare that if voted to power, his party would restore the provisions of Article 370. There is still one day to go for the assembly elections. See how the people will react. Don't you want Kashmir to be an integral part of India?" the Union minister asked.

Shah said Nandurbar has been included among the 115 districts under the Modi government's tribal development policy.

"In the next five years, Nandurbar will be developed as a premier tribal district in the country and Maharashtra as the number one state," he asserted.

The minister listed the development works being undertaken by the state government and the Centre for tribal welfare.

"The Modi government decided to construct a memorial for tribal freedom fighters. Similarly, Eklavya Model Schools have been started," he said.

Shah accused the Congress of using 'adivasis' (tribals) only for votes and never working for their development.

He also alleged that the Congress did not do anything for the welfare of Other Backward Classes in 55 years and said it was the Modi government which gave constitutional status to the OBC Commission.