The southwest monsoon usually arrives in the national capital on June 27 and covers the entire country by July 8. Most parts of the capital reported a good spell of rain.

The showers, however, brought the familiar sight of snaking lines of vehicles stuck on waterlogged roads for interminable minutes. 'Movement of traffic has been restricted at railway underpass Pul Prahladpur. Both the carriageways are closed due to waterlogging,' the traffic police said. The IMD has issued an orange alert, warning of heavy rainfall in some areas in the city on Thursday and moderate rainfall on Friday.

The maximum temperature will come down to 34-35 degrees Celsius. 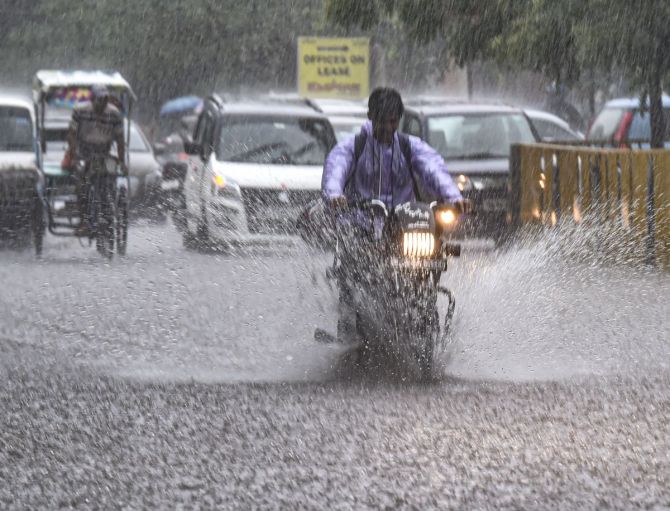 Last year, the IMD had forecast that the monsoon would arrive in Delhi nearly two weeks before its usual date.

However, it reached the capital only on July 13, making it the most delayed in 19 years. Weather experts say a gap of three to five days is considered normal.

According to IMD data, the monsoon covered Delhi 29 times in June and 33 times in July in the last 62 years. Weather experts have said the monsoon is expected to yield good rainfall in Delhi in the first 10 days and help cover the rain deficit.

Since June 1, Delhi has received 67 per cent less rainfall than normal, putting it in the category of 'large deficient' states.