Resign if you can't crush violence with iron fist: Rajinikanth to Centre

Superstar Rajinikanth on Wednesday lashed out at the central government over the violence in Delhi that left 24 people dead, saying the riots should have been dealt with an iron fist.

In a rare sharp attack on the Bharatiya Janata Party-led Centre, Rajinikanth also asked those in power to 'resign and go' if the violence could not be crushed with an iron fist.

However, he did not name anyone. His contemporary and Makkal Needhi Maiam chief Kamal Haasan hailed Rajinikanth's remarks, saying this was the 'right path.'

"They should have been so careful when the US President (Donald) Trump had visited (the country). The intelligence didn't do its job properly. It (violence) should have been completely crushed with an iron fist. We expect them to be careful at least from now on," he added.

To a question, he said intelligence failure meant failure of the Union home ministry.

"With iron fist this should be crushed, else (they) should resign and go..what is this..it is becoming too much," he said.

The violence should have been nipped in the bud and it was the job of both the Centre and the state government, he said, apparently referring to the Aam Aadmi Party government.

Asked if he wanted the protests to be crushed, Rajinikanth said he didn't refer to the anti-Citizenship Amendment Act agitations but asserted that such protests should not give way to violence.

The actor, who recalled his earlier statement that he will stand by Muslims if they were affected by the amended citizenship law, said he did not see CAA being withdrawn since it was adopted by both houses of Parliament, before being given the Presidential assent.

Therefore, the protests may not yield any results, he said responding to the ongoing anti-CAA agitation in Chennai, besides the occasional ones across the state.

"Immediately I am being branded as the Bharatiya Janata Party's mouthpiece, that the BJP is behind me, especially some senior journalists and political observers," he regretted.

However, he reiterated he will 'definitely stand' by those who are affected by the CAA.

The actor, who has announced he will face next year's assembly elections in Tamil Nadu, also wanted the media to play a constructive role during such times.

He further lashed out at politicians and individuals instigating people by making provocative statements using religion, saying this also should be dealt with firmly, else 'it will be difficult in the future'.

Kamal Haasan in a tweet in Tamil, said the path chosen by Rajinikanth is the right one and welcomed him.

'Sabash friend @rajinikanth. This path is the right path (it is) not a separate path...,' he said in an apparent reference to the actor's famous dialogue in a film that 'my path is separate path'. 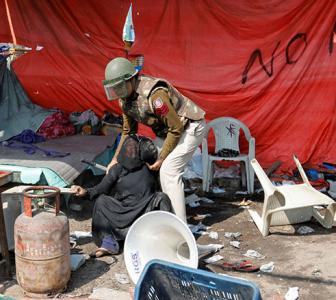