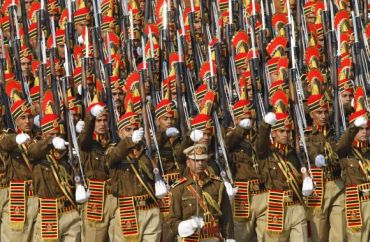 A kaleidoscopic view of the country's rich cultural heritage and military prowess were on display at the 64th Republic Day parade Saturday on the 8-km stretch from Rajpath to Red Fort.

An eager audience on both sides of the imposing Rajpath, the country's ceremonial boulevard facing the seat of power Raisina Hills, braved the winter chill and cheered loudly as the parade went past them portraying the rich and diverse culture of the country.

The icing on the cake was the 5,500-5,800 km ballistic Agni-V missile mounted on a road mobile launcher which was paraded by the Defence Research & Development Organisation as the crowd lapped it up with loud cheer.

General Officer Commanding (Delhi) Lt General Subroto Mitra led the synchronised military and police contingents as they marched to the cheerful tunes of bands through the 2-km Rajpath where President Pranab Mukherjee, also the supreme commander of the armed forces, took the salute for the first time after assuming office in July last year.

Police and other para-military forces turned Delhi into a a virtual fortress for the Republic Day celebrations as helicopters scanned from air, snipers kept a hawk-eye vigil from rooftops and armed personnel at every nook and corner provided a ground-to-air security apparatus.

Minutes before the parade began, Singh, Antony and chiefs of Army, Navy and Air Force laid wreaths at 'Amar Jawan Jyoti', an eternal flame in the memory of those who laid down their lives while defending the nation.

After the customary 21-gun salute and unfurling of the national tricolour by President Mukherjee, the spectacle began with four army helicopters flying above Rajpath carrying the national flag and the three flags of the Army, Navy and Air Force.

The next to follow were smartly-dressed Navy personnel and then the Air Foce contingent. The Air Force contingent was led by Flight Lieutenant Heena Pore.

A mini version of INS Vikramaditya which will join the Naval fleet by the end of this year was also part of the parade which highlighted Indian Navy's blue water operating capability.

As the country's armed and police forces demonstrated their might, states and different departments put up an impressive show when they showcased their rich cultural diversity in full display in 19 tableaux -- 14 from states and five from ministries.

This year, the number of tableaux has been reduced to 19 from last year's 23.

The first tableau to roll out was that of West Bengal which paid tributes to the "ethereal thinker-patriot-saint" Swami Vivekananda, whose 150th birth anniversary will be celebrated this year. Vivekananda is depicted as one who is propagating the message "truth is one but the wise call it by different names".

Uttar Pradesh came up with 'Braj ki Holi' -- a social and cultural festival embracing all the social and regional diversities in itself. The tableau depicted a scene where the women of Barsana are trying to fend off the 'gopis' of Nandgaon region of Brijbhumi.

The north-eastern state of Meghalaya, also known as the abode of clouds, came up with post-harvest festival dance Wangala, a thanks giving ceremony to their God 'Misi Saljong' (The Great Giver). The dance is played to beats of 100 drums.

Karnataka tableau was that of 'Kinna', a craft primarily used to carve religious idols and toys. Its main attraction is Kamdhenu, the mythical cow.

One of the interesting concept this year was from Jammu and Kashmir, which showcased a unique blend of tradition and technology with world's first cloned pashmina goat 'Noori' and the pashmina-making process. The clone has come as a good news for the fine fibre-producing pashmina goat, which is only spotted at an altitude of 14,000-ft in Ladakh.

Jharkhand, which participated in the parade after a gap of five years, depicted the Dokra art -- a specialised metal cast technique using wax casting.

While the northern hill state of Himachal Pradesh showcased the craft, architecture and folk life of tribal district of Kinnaur, Kerala came up a miniature landscape of the state with a houseboat.

Chhattisgarh tableau has Shiva, Buddha and Jain temples on board depicting the cultural prosperity and religious tolerance of its ancient city called Sirpur. Odisha tableau was based on the Chandan Yatra of Lord Jagannath.

The tableau from Rajasthan presented the Chitrashala of Bundi which is portrayed in the Bundi fort. It also showcased the famous traditional art of Bundi school of miniature paintings.

In its tableau, the national capital Delhi pitched itself as the cultural hub of the country where performing arts and fine arts come together as important events.

Ministry of Social Justice talks about inclusion, accessibility and empowerment of people with disabilities. Last on the list was the much talked about tableau of the I&B Ministry celebrating 100 years of Indian cinema.

Following the tableaus, 22 young brave hearts who won the national bravery awards drove through the Rajpath in gypsies to a huge applause following which 700 students enthralled the spectators with a spectacular performance of various dance forms.

Students from Kolkata presented Chhau Dance of Purulia District. Emerging from martial practice, the Purulia Chhau is a vigorous form of dance drama that draws its themes from Ramayana and Mahabharata.

One of the most popular folk dance of Western Odhisa -- Amalwas -- was also presented.

The next to follow was a breathtaking dare-devil motorcycle performance by 135-member Army Service Corps' team Tornadoes.

The grand finale of the parade was the spectacular flypast by the IAF.

Trailing them was an IL-78, flanked by two AN-32 and two Dornier, in a Big Boy formation and next in line was the fighters, -- five Jaguars followed by five MiG-29 in Arrowhead formation.

The breathtaking Trishul formation comprising three Su-30 MKI flew over the Rajpath and once in front of the saluting dais, the Su-30MKI aircraft split upwards, making a Trishul in the sky. The flypast concluded with another Sukhoi Su-30 MKI carrying out a Vertical Charlie manoeuvre over the saluting dais. 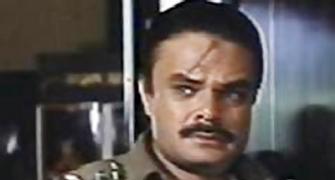 Quiz: Do you know these Bollywood villains? 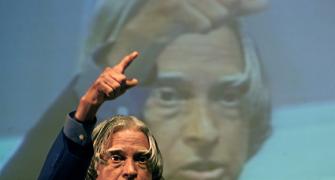 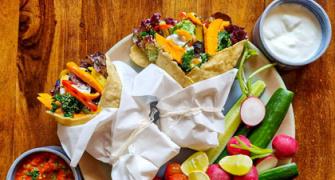 Year-end special: How India flexed its muscles in 2012 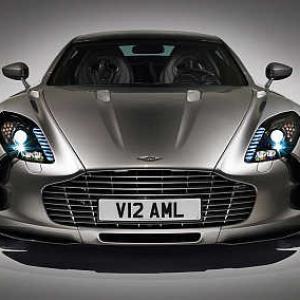