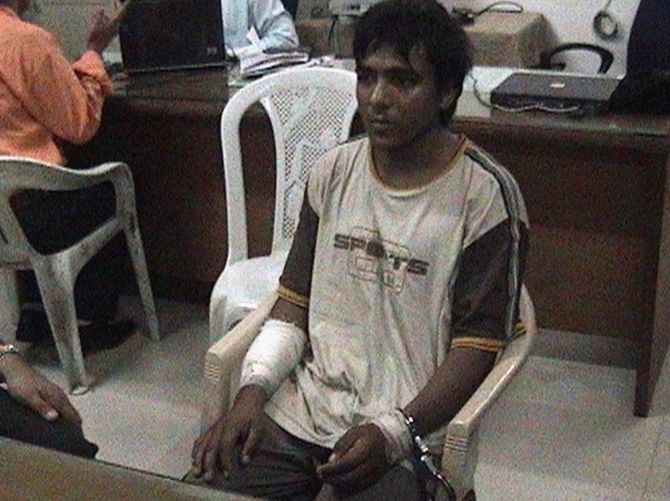 The sea training, as per the book written by historian Saroj Kumar Rath, also included 'how to fish', something that made Kasab think that 'he had got a job and he could earn a respectable living'.

'He (Kasab) was not informed by the LeT why he was being prepared as a mariner and as a fishermen,' quoted the book from what Kasab told during his interrogation.

According to the book, fearing a leak, the sea route assault plan was kept secret by the top LeT commanders -- Hafiz Saeed, Zaki-ur Rehman Lakhvi, Abu Hamza and others -- until November 2008.

It also said that before the D-day, the LeT tried to send attackers to Mumbai twice, but 'failed on both occasions'.

'In September 2008, the boat carrying terrorists hit a rock in the sea and the attackers almost drowned before their handlers rescued them.

'The other failed attempt was on 7 November 2008, when an alarmed captain of an Indian boat refused to surrender to the LeT and fled,' it added.

The book, in one of its essay titled 'Ajmal Kasab: The LeT side of the story', recorded that the 2-year training of the recruits for the 26/11 attacks was a 'joint responsibility of the LeT and the ISI'.

As part of the sea training the recruits were taught how to read maps, how to measure the depth of the sea, how to use GPS for the sea route, how to use the nets of fishermen and how to operate a ship.

'They were also trained on how to use a fisherman's net just to mislead the Indian navy personnel in case of an enquiry.'

'Kasab received (Daura-e-Khaas) training during May-July 2008. Skills like how to open and close Kalashnikovs, firing of a gun... and how to survive 60 hours without food and still climb a mountain with a heavy load were taught.

'The Mumbai attacks continued for 62 hours and crossing the LoC in Kashmir would take 60 hours as well,' it said.

Besides delving into the interrogation and confession report of Kasab, the book, also tried to answer significant questions like 'Why do young boys like Kasab become terrorists in Pakistan? What is the root cause of terrorism? Or what motivates them to follow a violent lifestyle?'

Kasab, the lone terrorist captured alive after the 26/11 Mumbai attacks, was hanged at Yerawada jail in Pune on November 21, 2012 after the then-president Pranab Mukherjee rejected his mercy petition.

How the secret operation to shift Kasab for hanging unfolded

For the select policemen involved in the covert operation to shift Kasab from Mumbai to Pune, the phrase 'Parcel reached Fox' signalled that the van carrying him had reached the jail where he was to be hanged the next day.

A senior police official involved in carrying out the operation said this was one of the seven code words/phrases used during the exercise, of which only the then state home minister R R Patil and a few top police officials were aware of.

The code 'Parcel reached Fox' was the last code exchanged between two senior officials involved in the operation to transport Kasab, he told PTI.

The hand-picked team was tasked with shifting Kasab from the high security 'Anda Cell' of Arthur Road prison in Central Mumbai to Yerwada Central Prison in Pune, he said.

The lone terrorist captured alive during the 26/11 attacks was covered in a burqa while being taken out of his cell on the night of November 20, 2012 and put in a police vehicle, the officer recalled.

"It was a big responsibility to transport him to Yerwada prison to be hanged. A death warrant was served to him seven days before the execution," he said.

The 'Force One' commando team of police, carrying advanced weapons, accompanied Kasab's vehicle. A State Reserve Police Force team trailing the vehicle a little behind, so as not to arouse suspicions, when it was on the Mumbai-Pune Expressway.

Except for two handsets, mobile phones of all officers and other police personnel involved in the operation were switched off and packed in a bag, the official said.

"During the entire three-hour long journey, Kasab did not utter a single word," he said. His demeanour did not change even when he was handed over to the Yerwada prison authorities at around 3 am," the official said.

By the time their mobile phones were switched on again the next day, November 21, the world knew that Kasab was executed, he said.

Lawyers who defended Kasab in HC yet to get their fees

Two lawyers who defended Kasab in the case on the directions of the Bombay high court are yet to get their legal fees from the Maharashtra government.

While the state government says they have not submitted any bills, the lawyers say that state prosecutors are not supposed to.

The two lawyers -- Amin Solkar and Farhana Shah -- were tasked with defending Kasab by the Maharashtra State Legal Services Department after they were nominated by then acting Chief Justice of Bombay high court J N Patel.

A notification about their appointment was issued on June 8, 2010 after Kasab had expressed his desire to contest the verdict of the trial court sentencing him to death in the Bombay high court.

According to the notification, Solkar was to receive remuneration equivalent to what is sanctioned for a public prosecutor, who conducts a death confirmation appeal, and Shah was to receive fees on par with an assistant prosecutor.

Keeping in tradition with the fairness of the trial, the law allows for appointment of a lawyer from the legal services department if accused is unable to do so.

Solkar and Shah had argued for Kasab in the Bombay high court against his death sentence almost on a day-to-day basis for nearly nine months before it confirmed the death sentence on him.

His conviction was upheld by the Supreme Court a year later.

When contacted by PTI, both Solkar and Shah said they are yet to receive their fees.

Both the lawyers said they had given the case priority as the high court was hearing it on a day-to-day basis from 11am to 5pm.

"I do not know why the state government has not made any efforts to pay us our fees. It has been seven years since the judgment was delivered by the high court. The Supreme Court confirmed the death penalty and Kasab is also dead. But we are still waiting (for the fees)," Solkar told PTI.

He said he was contemplating legal action to get his dues cleared from the state government.

"We are only asking for what is legally due to us. The law says every accused should get a fair trial. To ensure this, we were appointed to defend Kasab... then why this delay in paying us our fees," Solkar said.

Shah, on the other hand, says she has given up hopes that she will get her remuneration for appearing in the case.

"I have now given up. I consider it as a pro bono case (a case taken up voluntarily and without payment)," Shah, who had defended several accused in the 1993 Mumbai serial bomb blasts case, told PTI.

While the exact amount per hearing was not known, sources in the know put the figure somewhere between Rs 1,500 to Rs 2,000 per day.

An official from the state government's law and judiciary department said the government would pay the fees only after the two lawyers submit their bills.

To this, both Solkar and Shah said the need to submit bills does not arise at all as they were appointed by the high court and a notification to this effect was issued by the government.

"Does the government ask for bills from the public prosecutor before giving them their remuneration?" Solkar said.

Abbas Kazmi, a lawyer who had defended Kasab before trial judge M L Tahalayani, claims he has been paid by the government for his services.

"My remuneration was given by the government soon after the completion of the trial," Kazmi said, adding he got his fees without having to submit any bills to the government.

Manik Gupta/Sunanda P in Mumbai
© Copyright 2023 PTI. All rights reserved. Republication or redistribution of PTI content, including by framing or similar means, is expressly prohibited without the prior written consent.