The mortal remains of five people from Karnataka, killed in the massive Easter Sunday bombings in Sri Lanka, were brought to their homes in Bengaluru in the early hours of Wednesday and late on Tuesday night amid a pall of gloom. 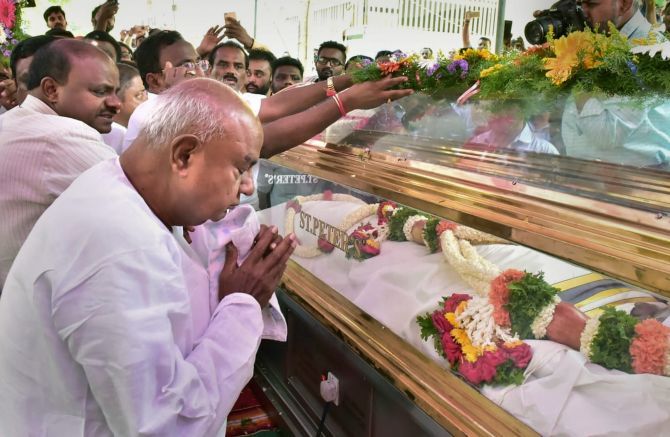 Karnataka Home minister M B Patil received the mortal remains at the airport, which were later sent to their residences. While 10 persons from Karnataka have been confirmed dead, at least seven of them are said to be JD-S workers.

A holiday in Sri Lanka after a gruelling campaign in the Lok Sabha polls snuffed out the lives of the JD-S workers when the blast took place very close to the dining table as they sat for breakfast at the Shangri-La hotel in Colombo, one of the major targets of the deadliest terror attacks in the island in recent times.

The bodies of Ramesh, Adakamaranahalli Mare Gowda and Harokyatanahalli Puttaraju will be brought to the city on Wednesday, officials said on Tuesday night, adding that the deaths of Narayan Chandrashekhar and Remurai Tulasi Ram have also been confirmed, but details are not available. 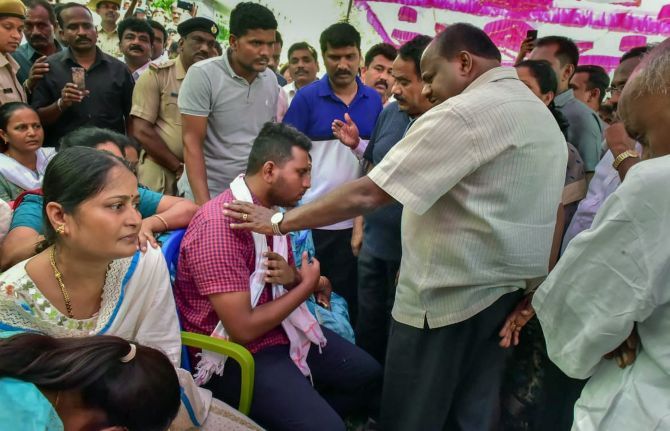 The officials said Purushottam Reddy, who is injured, is also being shifted to the city for further treatment.

Seven suicide bombers carried out a series of devastating blasts that tore through churches and luxury hotels in Sri Lanka on Easter Sunday, in the country's worst terror attack.

The toll in the bomb attacks has risen to 359, police in Colombo said Wednesday. IMAGE: Friends and relatives carry the casket of Hanumantharayappa for the last rites. Photograph: PTI Photo

Meanwhile, the mortal remains of Hyderabad businessman V Tulasi Ram, who was also among the 10 Indians killed, were brought in the city on Wednesday and laid to rest at a graveyard, his family and friends said.

Tulasi Ram had gone to Sri Lanka last week with his business partner M Srinivas Babu, who is also his distant relative, they said.

"He went to Sri Lanka as part of a business trip and also a vacation. He spoke to us on Saturday and after that did not make any phone calls or answer our calls.

"Following the blasts, we enquired at different levels including the Indian High Commission," the family members and friends said, adding they were officially informed about Tulasi Ram's death on Monday.

His mother told mediapersons: "He spoke to me on Saturday night. After that he did not call....Finally through his friend I came to know about his (death)".

A friend of Tulasi Ram said they were informed that he was killed in the blasts at a hotel, while Srinivas Babu was injured and treated there.

Babu is likely to fly back to Hyderabad Thursday.

A senior Sri Lankan Muslim leader on Wednesday dismissed as 'nonsense' the government's view that the deadly attacks may have been a retaliation for last month's massacre of Muslims in two mosques in New Zealand.

Addressing an emergency session of Parliament on Tuesday to discuss the country's worst terror attacks, state minister of defence Ruwan Wijewardene said the early findings of the ongoing probe found that the suicide bombings were in revenge for the March 15 killings at two mosques in Christchurch which left 50 people dead.

But Hilmy Ahamed, the Muslim Council of Sri Lanka's vice president, did not buy the government's version.

Pointing to the relatively short period of time between the attacks, Ahamed said it was impossible for the bombings in Sri Lanka to have been planned in the period, saying it was likely in the works for longer, with foreign influence.

The Islamic State terror group has claimed responsibility for the attacks in Sri Lanka, but did not mention New Zealand as a justification.

"It is nonsense to link (the attacks) to New Zealand," Ahamed told CNN.

"The New Zealand attack opened the eyes of the world to the crisis the Muslims are facing," he said, adding it was something of 'blessing' for drawing attention to growing Islamophobia worldwide.

He also praised New Zealand Prime Minister Jacinda Ardern for her response to the shootings, particularly for building connections between communities.

"We sent letters to the Nobel prize committee to award the peace prize to the New Zealand prime minister," he said.

"She definitely deserves the Nobel peace prize," he added. 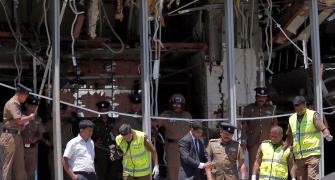 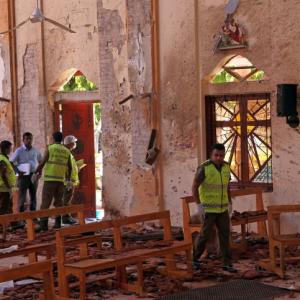