Rains abated in Chennai on Thursday giving relief to people tormented by the heavy downpour of the last three days but excessive discharge of water last night from Chembarambakkam lake on the outskirts flooded new areas of the city threatening to uproot people from their homes.

Union Home Minister Rajnath Singh informed the Lok Sabha that the death toll in Tamil Nadu due to floods had gone up to 269. Even as the rains moderated across the city, availability of essential commodities like milk and water was affected while in some places they were being sold at exorbitant prices.

For the third consecutive day power, transport and telephone facilities were affected due to the rains.

A one litre packet of milk was being sold for Rs 100 in some places while vegetables like tomato and beans were being sold at Rs 80 to Rs 90 per kg.

As the state electricity board had suspended power as a precautionary measure, most of the residents of the city and its neighbourhoods, who had stocked on milk and vegetables were unable to preserve them for long.

Large queues were seen in places where milk was being sold while the famous Koyambedu vegetable market was cut off from the city, leading to the spiralling vegetable prices.

The price of mineral water also hit the roof with a 20 litre bottle normally available for Rs 30 being sold for Rs 150 per bottle.

Most of the supermarkets and hotels across the city were either shut or had run out of stocks. 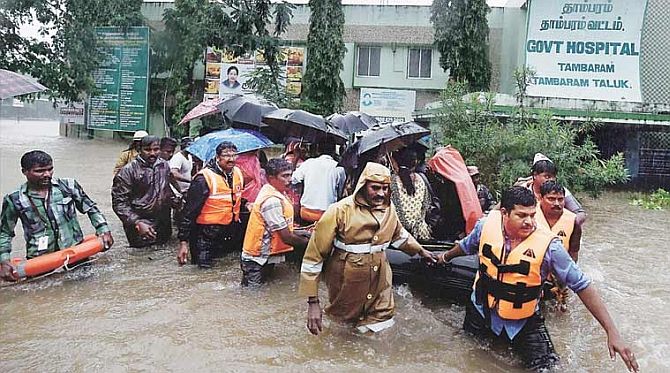 The Indian Air Force on Thursday conducted operations to provide relief to those affected by the devastating rains in Chennai.

The IAF choppers dropped food packets to those stranded on rooftops of their homes in Chennai.

Meanwhile, the National Disaster Relief Force teams have doubled the number of their rescuers in the rain and flood-battered Chennai and adjoining areas to 1,200 even as the force today decided to penetrate deep into the affected areas to aid the marooned.

A meeting of the Crisis Management Group was held on Thursday morning under the chairmanship of Union Home Secretary Rajiv Mehrishi along with officials of Ministries of Defence, Food, Railways, Agriculture, Health, Department of Telecommunication, National Disaster Management Authority, India Meteorological Department and the NDRF.

"We have 30 teams, each having 40 members, working in these areas now and we plan to concentrate in the areas of south Chennai which are the worst affected. The meeting took stock of the preparedness of various agencies," NDRF Chief O P Singh said after the meeting held at North Block. 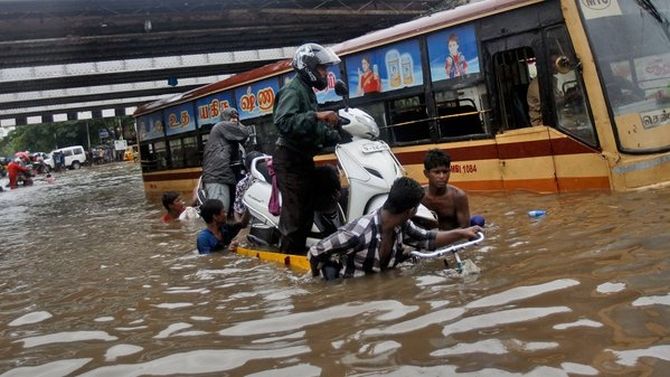 He said the force has deployed about 110 inflatable and other kinds of boats and separate assortment of buoys and life jackets with the rescue and relief teams so that the needy and the marooned get help.

The meeting also decided to move two additional columns of the army in these areas even as officials of these central departments were asked to keep in constant touch with their Tamil Nadu counterparts. One column of the army comprises around 75 personnel.

Singh said NDRF has rescued about 2,400 affected people till now to safer areas.

"We are hopeful of getting into more and more areas today as the rains have slowed down since yesterday and we have seen water receding in many areas. We are hopeful of doing more than what we did yesterday," he said. The force has also deployed 2 teams, out of the 30, in Puducherry while another set of NDRF teams are on standby at Patna and Pune which can be airlifted at short notice, he said.

Teams of the National Disaster Relief Force, army, navy and commandos of police and fire service personnel were deployed for rescue and relief works in the worst-affected areas of Kotturpuram, Jafferkhanpet and Nandanam on the banks of the Adyar river that has been in spate for the last two days. 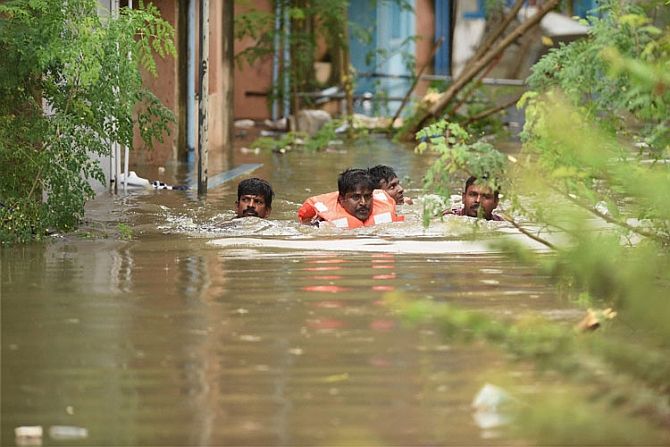 For the first time in over 40 years, the water has risen rapidly on the river breaching the road and the Maraimalai Adigal bridge in Saidapet cutting the arterial Anna Salai (Mount Road), rendering it out of bounds for motorists.

Though there has been no rain since Wednesday night, the fresh flooding of the streets in the heart of the city in areas like Kodambakkam and T Nagar and Ashok Nagar has been caused by the release of an estimated 30,000 cusecs of water from the Chembarambakkam lake, one of city's source of drinking water.

The reservoir has been surplussing because of heavy inflow due to rains in the catchment area.

A Navy official involved in the rescue efforts said that most of the places are flooded and lot of efforts are going on both on the ground and by air. 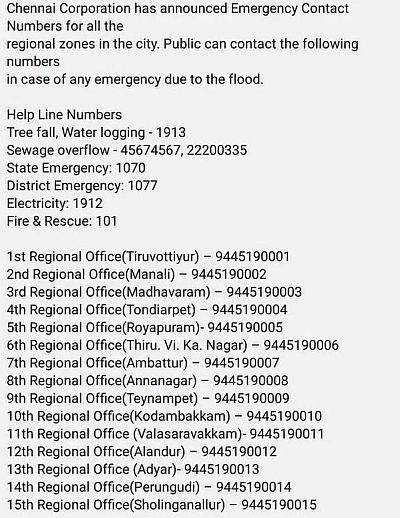 "An aircraft is going to evict people stranded at the civil airport. So we are going to establish an air bridge between Meenambakam civil airport at Chennai and Arakkonam. So that maximum people will be transferred to Arakkonam. And thereafter they will be flown out," the official said.

The Airport Authority of India had late Wednesday night announced that Chennai airport will remain shut till December 6 in the wake of the downpour and predictions of more rains.

All modes of transport -- air, road and rail services -- have been hit due to the unprecedented deluge, leaving thousands of passengers stranded at the airport and various rail terminals.

Adding to the worry of the citizens and administration, the weatherman has forecast more rainfall under the influence of a trough of low pressure and upper air circulation over the southwest Bay of Bengal and Sri Lankan coast.

Thereafter, the state will see an anti-cyclone activity which will be associated with "heavy rains" at some places.

The chief minister, who was in a chopper, witnessed first hand the damage caused by the monsoon fury, officials said. Later she took stock of the issue with the senior officials, they said.

Various ministers, including O Paneerselvam, have been deputed to take charge of the relief works in different districts.

Senior IAS officials have also been tasked to ensure that relief reaches the people in the worst-affected Chennai and other districts.