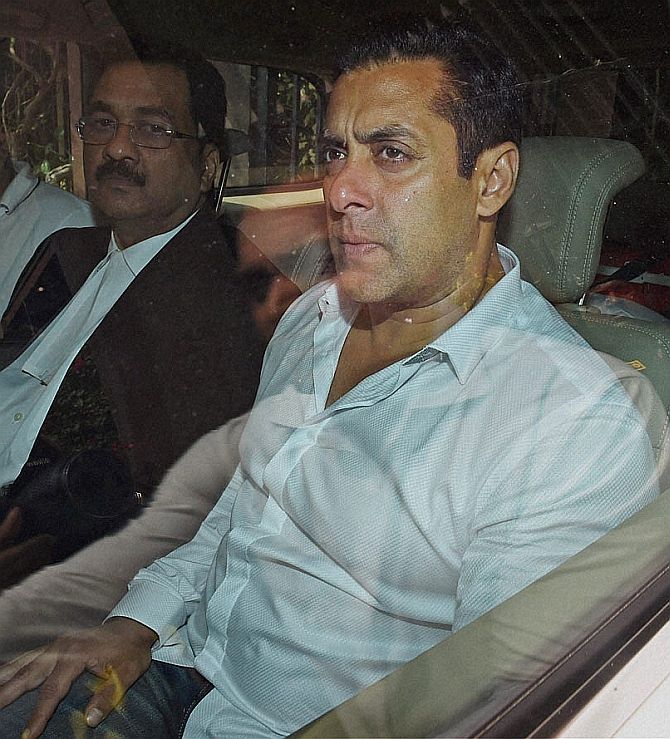 Bollywood superstar Salman Khan was on Wednesday granted interim bail of 2 day after he was sentenced to five years’ rigorous imprisonment in the 2002 hit-and-run case.

Justice Abhay Thipsay granted interim bail to the actor after observing that the accused had not been given a copy of the conviction order by the sessions court.

“The urgency in the matter is that the appellant (Salman) who was on bail throughout the trial is likely to be taken into custody today. However, the copy of the order has not been delivered yet,” Justice Thipsay observed.

The judge said, in all fairness and in the interest of justice, it would be proper to protect Salman Khan for the time till a copy of the order is furnished to him.

“The order could have been pronounced when the copy was ready. Why was the order pronounced today? It should not have been delivered if the copy is not ready,” Justice Thipsay said.

The judge also directed the actor to execute a fresh bond before the trial court today itself.

Appearing for the actor, senior counsel Harish Salve argued that Salman should be granted bail till he gets copy of the order.

Opposing his plea, government pleader Sandeep Shinde said the high court should not entertain the actor’s plea without a copy of the conviction order. He said the accused had not enclosed the copy of the order in his appeal as required under law.

The 49-year-old actor was accused of ramming his Land Toyota Cruiser into a roadside bakery shop, killing one person and injuring four others sleeping outside. He was also found guilty of driving without licence, for which he received two months jail term, and driving under influence of liquor.

“All charges have been proved against you...What you have to say? the judge asked Salman who was in the dock.

“I hold that you were driving the vehicle. You were intoxicated. I also do not agree with your plea that the person who had died had received fatal injuries after a crane dropped the car on the persons underneath while removing it,” the judge said, rejecting the defence’s claim that the actor’s driver Ashok Singh was at the wheel when the accident took place.

Salman, attired in a white shirt and light blue denim jeans, said, “I was not driving the car... But I respect your decision and accept it. My lawyer will speak on my behalf.”

Salman's bothers Arbaaz and Sohail, sisters Alvira and Arpita, besides long-time bodyguard Shera stood beside him in the courtroom which, barring the media, court staff and the lawyers, was declared out of bounds for others.

A huge crowd of his fans had collected outside the court premises in Fort area of south Mumbai, throwing normal traffic into disarray.

Since the fateful night of September 28, 2002 when the accident took place, the case saw several twists and turns.

In October 2002, Mumbai Police invoked section 304-II of IPC (culpable homicide) against him, which he challenged in a sessions court in March 2003. The sessions court rejected his plea and ordered the magisterial court to frame charges.

In October 2006, the Metropolitan Magistrate framed charges against the actor for the offence of rash and negligent driving, which attracts punishment upto only two years, besides other penal provisions, but not for culpable homicide.

In October 2011, the prosecution demanded that Salman Khan must be tried under harsher sections. Additional Chief Metropolitan Magistrate V S Patil, who was then conducting the trial, abruptly terminated it on December 23, 2013, after examining 17 witnesses, invoked the charge of culpable homicide not amounting to murder, and committed the case to the sessions court for trial.

Before the quantum of sentence was pronounced on Wednesday, prosecutor Pradeep Gharat sought deterrent punishment for Salman saying a strong message should go to the society that such acts would be dealt with seriously.

Gharat said he did not agree with Salman's argument that the mishap was an act of God. "It was a serious offence and maximum punishment should be awarded to the accused," he said.

Automobiles have become a death trap due to careless driving and a message should go to the society that in such cases the accused cannot get away with a lighter punishment, the prosecutor said.

On the other hand, the actor's lawyer Srikant Shivade said, "Salman's case was on a better footing than the Alistair Pereira and Sanjeev Nanda BMW cases in which more than 5 persons were killed. In the Alistair case, seven people were killed and a bottle of liquor was found in the car."

In keeping with an earlier direction of the Bombay High Court, Salman had also deposited Rs 19 lakh as compensation for the victims in 2002 itself, said his lawyer. The HC's order had come while hearing a PIL.

The lawyer further said that in 2007, the actor had started Salman Khan Foundation and an NGO 'Being Human' to serve the society. He has done a lot of community service, his lawyer said and submitted to the court the balance sheet of these organisations to show the charity work done by them.

The lawyer appealed to the court to take a "compassionate" view while awarding the sentence.

The defence lawyer also produced a physician's certificate which said the actor had a neurological problem which could aggravate, if proper care was not taken. He urged the court to also take this into consideration while awarding the sentence.

However, when Salman gestured to him not to raise this issue, the lawyer told the court that he was not pressing the plea.

In a related development, the court rejected the plea of activist Santosh Daundkar seeking action against the police for perjury (giving false evidence under oath) for examining a wrong set of doctors in the trial, thereby delaying the process of justice.

He had also sought action against the police for not examining a key witness--singer Kamaal Khan, who was in the vehicle at the time of mishap.

Dismissing Daundkar's plea as "frivolous", the court imposed a cost of Rs 10,000 on the activist.