In the second part we will explain the ways of tobacco use and its consequences.

Ways of tobacco use

Tobacco is used in two ways or forms: Smoke and smokeless.

In India, 28.6 per cent of adults currently use tobacco in any form.

One in every eight adult tobacco users in the country uses it in both ways.

The below multi-map shows the percentage of adults aged 15 or above who currently smoke and use smokeless tobacco.

The states with a higher percentage of adults who currently use tobacco for smoking are Mizoram, Meghalaya, Tripura, Arunachal Pradesh and Manipur.

States with a higher percentage of male smokers are Mizoram, Meghalaya, Tripura, Arunachal Pradesh and Manipur.

Moreover, states with a lower percentage of adults who currently use tobacco for smoking are Maharashtra, Goa, Bihar, Chhattisgarh, and Odisha.

Number of cigarettes smoked per day

The daily frequency of smoking or the number of cigarettes smoked every day is an important dimension of tobacco smoking; it reflects the level of addiction.

The above chart explains the percentage distribution of daily smokers classified by the number of cigarettes smoked per day.

A typical daily smoker in India smokes an average of 6.8 cigarettes every day.

The above chart explains the age-wise percentage distribution of daily smokers classified by the number of cigarettes smoked per day.

Prevalence of smoking is less among young adults aged 15-24. The mean of cigarettes smoked by young adults is 5.1.

The average monthly expenditure was arrived at, indirectly, based on the following heads of data:

1) The average number of manufactured cigarettes/bidis smoked per day by a daily smoker;

2) the number of manufactured cigarettes/bidis bought during last purchase of these tobacco products;

3) the amount spent on last purchase.

The below map shows the state-wise average monthly expenditure on cigarettes incurred by the daily smokers.

The size of the circle shows the percentage of smokers in that state and the color shows the average monthly expenditure on cigarettes by the smokers.

The states where the smokers spend less than Rs.500 monthly on cigarettes are Manipur, Madhya Pradesh and Chhattisgarh.

The states where there is a higher percentage of adults who currently use smokeless tobacco are Tripura, Manipur, Odisha, Assam and Arunachal Pradesh.

The states where there is a higher percentage of males using smokeless tobacco are Jharkhand, Odisha, Assam, Manipur and Arunachal Pradesh.

Whereas, states where there is a higher percentage of females using smokeless tobacco are Tripura, Mizoram, Manipur, Odisha and Assam.

The states where there is a lower percentage of adults who currently use smokeless tobacco are Himachal Pradesh, Jammu and Kashmir, Puducherry, Kerala and Chandigarh.

And, states where there is a lower percentage of males using smokeless tobacco Puducherry, Himachal Pradesh, Jammu and Kashmir, Kerala and Andhra Pradesh.

The states where there are a low percentage of females using smokeless tobacco are Himachal Pradesh, Punjab, Chandigarh, Jammu and Kashmir and Haryana.

For example, in Jammu and Kashmir, 20.8 per cent adults smoke tobacco and 4.3 per cent use smokeless tobacco.

Similarly, in Andhra Pradesh, 14.2 per cent smoke tobacco and 7.1 per cent use smokeless tobacco.

As a general trend, dual use is low across states.

Important exceptions to this are states from the north-east, where it could be more than one in 10 of the population.

In Uttar Pradesh and Jharkhand, the prevalence of dual use is about 7 per cent.

The above chart shows the percentage of adults aged 15 or above who are current users of various smokeless tobacco products in India.

The two most commonly used smokeless tobacco products in India are khaini -- tobacco-lime mixture used by 11.2 per cent Indians and gutka -- mixture of tobacco, lime and areca nut used by 6.8 per cent adults.

The above chart shows the age-wise percentage of adults aged 15 or above who are current users of smokeless tobacco.

Consequences of Tobacco use

Tobacco use has predominantly negative effects on human health. Concerns about health effects of tobacco have a long history.

According World Health Organisation (WHO) tobacco contains more than 50 chemicals that cause cancer.

Tobacco also contains nicotine which is a highly psychoactive drug.

Tobacco use is the single greatest cause of preventable death globally.

According to National Institute of Cancer Prevention and Research, oral cancer is the most common cancer in India amongst men and fifth most frequently occurring cancer amongst women.

It is the third most frequently occurring cancer in India amongst both men and women.

Around 80 per cent of oral cancer cases are directly attributable to tobacco use.

Smokeless tobacco is more prevalent than cigarettes or bidis in India.

Cancers of oral cavity and lungs in males and cervix and breast in females account for over 50 per cent of all cancer deaths in India.

The rates for oral cancer among males are significantly higher than females and these rates increase with age.

This cancer can be prevented by saying no to tobacco. Tobacco use is always injurious to health. 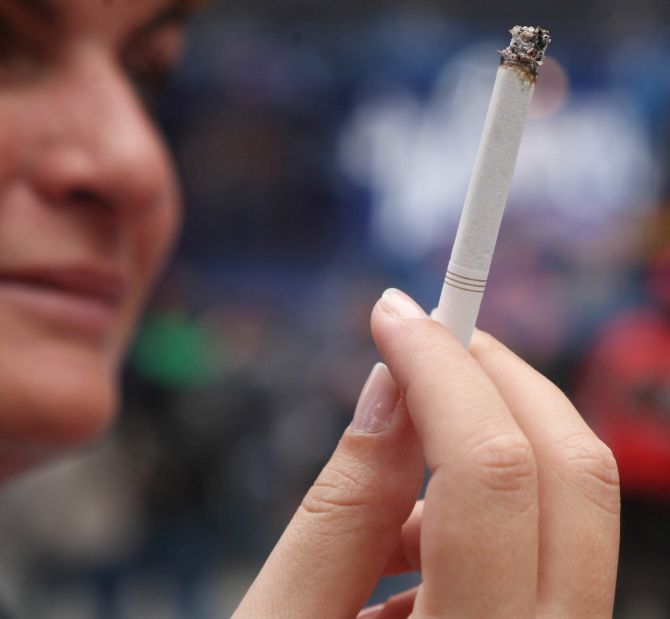