News
Business
Movies
Sports
Cricket
Get Ahead
Money Tips
Shopping
Sign in  |  Create a Rediffmail account
Rediff.com  » News » With 40 per cent of rape cases, Delhi is the most unsafe city for women

With 40 per cent of rape cases, Delhi is the most unsafe city for women

The national capital also reported 38.8 per cent of the total number of crimes under the Indian Penal Code.

Delhi, the national capital, is also the crime capital of India.

According to the National Crime Records Bureau, Delhi accounts for nearly 40 per cent of rapes reported, 33 per cent of crimes against women and the highest crime rate in 2016.

It also has the dubious distinction of topping the NCRB list in cases of murder, kidnapping and abduction, juveniles in conflict and economic offences.

Using the data provided by the NCRB, Rediff Labs has generated a chart of the most unsafe cities for women.

As per the graph, one can see that Delhi is the most unsafe city for women, recording 13,803 complaints of which 1,996 are of rape.

Delhi also accounted for nearly 29 per cent of cases of cruelty towards woman by husband and his relatives (3,645) and dowry deaths (162), the NCRB data revealed.

The financial capital of India, Mumbai comes in second when it comes to rape complaints with 702 while Pune was third with 354 rapes.

Delhi also reported 38.8 per cent of the total number of crimes under the Indian Penal Code, followed by Bengaluru (8.9 per cent) and Mumbai 7.7 per cent.

The chart above shows which city has recorded the most crime cases. The NCRB data reveals that the  national capital recorded the highest crime rate at 182.1 compared to the national average of 77.2. 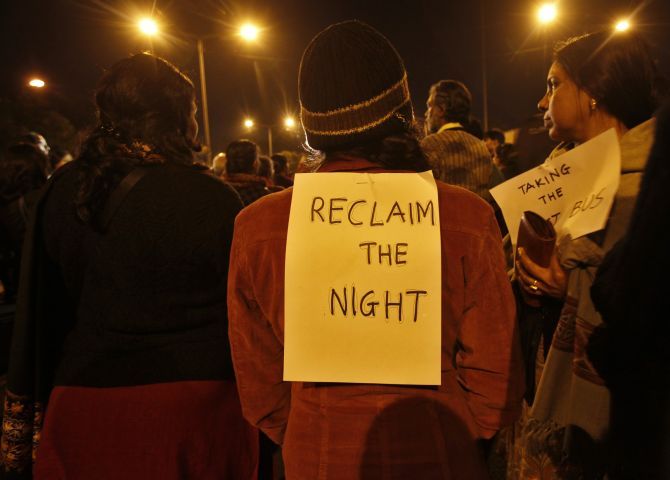