Gangster-turned-activist Lakha Sidhana wanted in connection with the Republic Day violence in the national capital openly addressed a farmers' rally here on Tuesday, warning the Punjab Police against cooperating with the Delhi Police. 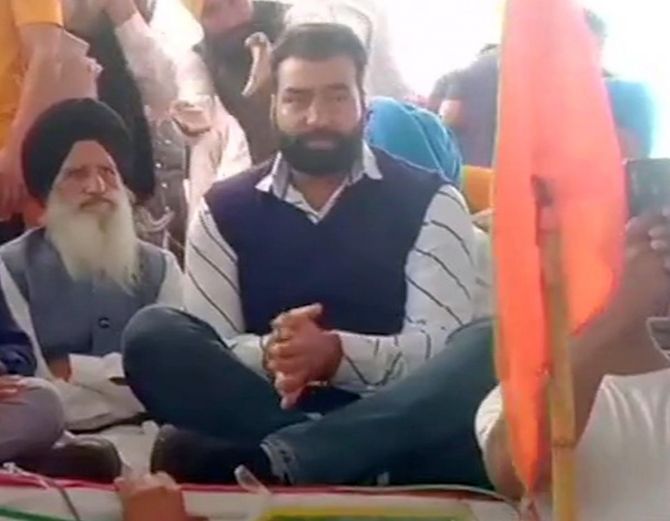 At the meeting in Bathinda's Mehraj village, the state police was deployed to maintain law and order.

When asked why the Punjab Police did not arrest him, Inspector General (Bathinda Range) Jaskaran Singh said their job was to maintain law and order.

"As per law, we cannot do that as we have not registered a case," he said.

The Congress government in Punjab has been backing the agitation against the Centre's farm laws enacted last year.

The gangster-turned-activist had given the call for the public meeting last week.

After addressing the gathering, Sidhana left the venue.

Punjab Police personnel were deployed near the rally site, which is the ancestral village of Chief Minister Amarinder Singh.

Addressing the gathering, Sidhana said the event was called in support of the farmers' agitation against the Centre's three farm laws.

He also asked people to "gherao" the Delhi Police personnel if they come to arrest the state youth, apparently referring to the Republic Day violence incident.

He accused the Centre of trying to "create fear" in the minds of people with the arrest of youths with an intention of forcing them to withdraw from the agitation.

"If Delhi Police personnel come to arrest anyone in Punjab, then make announcements in villages, gather crowds and gherao them," he said.

Sidhana further said if the Punjab Police cooperates with the Delhi Police in arresting youths or farmers in the state, then Chief Minister Amarinder Singh will be held responsible for this.

Sidhana thanked people to come in large numbers for the rally on a very short notice.

He asked farmers leaders to hold a programme at the Delhi borders in coming days and exhorted the youth to join the protest sites in large numbers.

He asked people to stay united, saying this struggle can only be won with unity.

Sidhana also appealed to the Dalits to join the farmers' agitation. "This agitation is not of any religion or caste. It is a fight of everyone," he said.

Thousands of protesters had clashed with police during the Republic Day violence. Many protesters reached the Red Fort and entered the monument, and some of them even hoisted religious flags on its domes.

In a video that appeared on social media on Saturday, Sidhana had appealed to people to take part in the programme in large numbers.

The former gangster had several cases registered against him in Punjab and was jailed many times. He had unsuccessfully contested the 2012 state assembly polls.