'Do not write off the Left' -- was the message from the Left camp as its three parties bagged 16 out of the 29 seats they contested in the Bihar Assembly election, according to the Election Commission (EC) website. 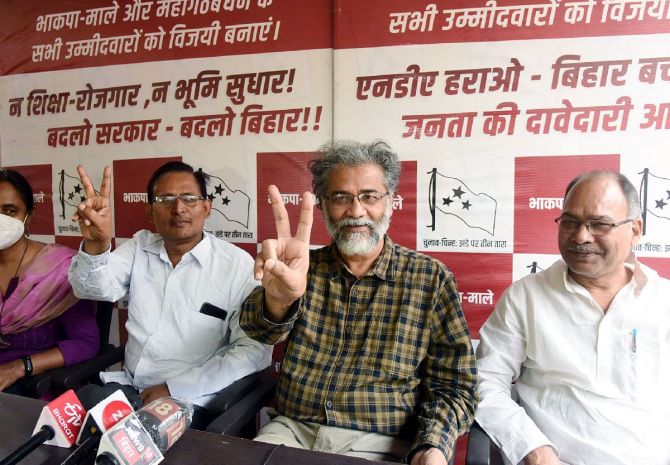 In an alliance with the Rashtriya Janata Dal, the three Left parties were given 29 seats by Tejashwi Yadav, despite reluctance from the members of his party.

According to the final results on Tuesday, the Left parties -- CPI-ML has won 12 of the 19 seats they fought on; while the CPI-M and the CPI won two seats each.

In 2010, only the CPI managed to win a seat in Bihar, while in 2015, the CPI-ML (Liberation) grabbed three seats as the other two Left parties drew a blank.

"Our strike rate in Bihar is 80 per cent and if we had been given more seats, we would have contributed more to the Gathbandhan tally.

"Our alliance with the RJD and Congress combined issues of social justice with that of economic justice. One cannot be achieved without the other," CPI-M general secretary Sitaram Yechury told PTI.

Many in the party had questioned RJD leader Tejashwi Yadav over what they called 'disproportionate concessions to the Left, particularly to CPI-ML', however, the calculations, triggered by the state's socio-political dynamics and the cadre strength of the Left parties seem to have worked.

"This election result has shown that no one can write off the Left and those doubting the relevance of the Left parties should think of what our strike rate has been in Bihar. No one has that strike rate. The Left is a necessity for Indian democracy," Yechury said.

CPI general secretary D Raja echoed Yechury's comments, stating that the Left parties have been consistently working for the people on the ground, whether elections have been won or lost.

"We have been a consistent force in Bihar, working with the marginalised, despite adverse poll results. We have won the trust of the people and we are the future of this country. There is a tendency to write off the Left. Do not write us off," he said.

The leaders also highlighted how a spur in youth and student agitations across the country over the last couple of years on issues from corruption to unemployment, education, shrinking of democratic spaces gave the Left the opportunity to lead these movements.

"The Left parties gave the Mahagathbandhan the legitimacy it required to pursue social justice along with economic justice," said Yechury.

CPI-ML general secretary, Dipankar Bhattacharya too credited the youth with the victory and said that the environment in the country was ripe for a Left resurgence.

"This was a different kind of election. This was more of a people's movement. We banked on young candidates, student leaders, candidates who were part of farmer struggles, working class people. That seems to have worked.

"The 25-point campaign charter of the Mahagathbandhan is the demands emerging in the course of the teachers' movement, skill workers' movement over the last few years.

The Left leaders all concurred that the decision to go with the RJD was a tactical one to prevent the BJP from forming the government.

While Yechury stated that their aim was to prevent the saffron party from 'communalising' the country, Raja said that even during the 2019 general elections, the CPI and the CPI-M had tried to tie up with the Bihar-based party to form an alliance against the BJP, but talks failed to take off.

The CPI-ML, however, had a tacit understanding with the RJD in the 2019 polls in four Lok Sabha seats.

Another aspect of the changing fortunes of the Left parties seemed to be the emergence of their student and youth leaders in mainstream politics.

CPI's Ramnarayan Yadav of Jhanjharpur and Suryakant Paswan of Bakhri seat are ex youth organisation leaders of the CPI.

While Paswan has won his seat by a margin of 777 votes, Yadav is trailing by almost 40,000 votes.

CPI-ML has two former JNU students in the fray, While candidates like Manoj Manzil from Agiaon, Ajit Kumar Singh from Dumraon and Amarjeet Kushwaha from Buxar are all leaders of All India Students' Association and RYA, student-youth bodies of the CPI-ML.

In fact, out of the 19 candidates that the party fielded this time, six are under 35 years of age and 10 are below 50.

Among the winners, Sandeep Saurav, 33, who won from Paliganj constituency defeated the Janata Dal-United candidate.

Saurav, a former Jawaharlal Nehru University Students' Union general secretary and an AISA activist, gave up his job of assistant professor at a Bihar college to fight the polls.

CPI-ML's other candidate Manoj Manzil, 36, won by over 50,000 votes from Agiaon. He was arrested after filing his nomination from Agaion constituency.

Manzil is known for leading the 'Sadak Par School' movement in Bhojpur against unemployment.

He is also a prominent leader among the Dalit community.

He is a former AISA Bihar state secretary and has completed his doctoral studies in the history of farmers' agitation in Bihar.