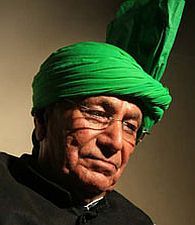 Former Haryana chief minister O P Chautala and five others including his son were on Thursday awarded a decade-long jail term in the teachers' recruitment scam case by the Delhi high court which said "overwhelming evidence" showed the "shocking and spine-chilling" state of affairs in the country.

The court, which modified the trial court order on the quantum of sentence and awarded two-year jail term to 50 other convicts, asked Ajay Chautala, son of the 80-year-old Indian National Lok Dal chief and former chief minister, and few others to surrender today before the prison authorities to serve the remaining sentence.

Justice Siddharth Mridul, in his 400-page verdict, said, "The facts of the present case as unfurled by the overwhelming evidence led by the prosecution at trial reveal a shocking and spine-chilling state of affairs prevalent in our country."

The bench, while upholding conviction and 10 year jail term to Chautala and others including whistleblower Indian Administrative Service officer Sanjiv Kumar, said, "An ingenious employment scam spanning across 18 districts of state of Haryana was given effect to by persons at the helm of power and the entire bureaucratic machinery fell prey to its satanic influence."

Before pronouncing the verdict in a packed courtroom, the judge said, "So, this is the end of the road. I can tell you that all the appeals have been dismissed."

Besides Chautalas and Sanjiv Kumar, the then director of primary education, the court also awarded 10 year jail term to IAS officer Vidya Dhar, then officer on special duty of the chief minister, and Sher Singh Badshami, then MLA and political adviser to Chautala senior. The bench rejected the plea that leniency be shown to the INLD Chief as he is old and ailing.

"It may be argued that A-4 (Chautala) being an aged person, towards the tail end of his political career should be shown some mercy. It is for this very reason that I do not agree with this submission. The man was the chief minister of Haryana, capable of much hope and an inspiration to the youth of the state.”

"Cheating them of their future deserves punishment of the highest kind. The appellant committee members also are all mostly senior citizens, respectable teachers either retired from government service or nearing retirement. A-4 has played a role in sharing their guilt as well."

Chautalas and 53 others including two IAS officers were convicted on January 16 by the trial court for illegally recruiting 3,206 junior basic trained  teachers in Haryana in 2000.

The bench concurred with the trial court findings on the sentences awarded to the Chautalas and three others and said, "Education is a tool, which can be skilfully used by competent teachers to model the youth (our most precious human resource) in their formative years, to enable them to become productive citizens in future and herald India to epitome of success.”

"Yet the instant case demonstrates how the process of appointing competent teachers was also vilified and not spared from the malaise of corruption. Such scams not only result in dissemination of poor quality education to the millions of children, who are bound to suffer, but also unfairly deprive the competent participants in such selection processes an opportunity to gain public employment and meaningfully serve the country."

The high court reduced to two years jail terms of five other convicts, including a woman officer, who were initially awarded ten years sentence by the trial court in 2013. They are Madan Lal Kalra, Durga Dutt Pradhan, Bani Singh, Ram Singh and Daya Saini.

The bench, in its verdict, used strong and telling language to denounce the arbitrary and corrupt methods used by accused in recruiting junior basic teachers in the state.

"Public confidence is bound to get shaken, resulting in frustration/anxiety amongst the youth, who eagerly await the scarce employment opportunities, giving further impetus to the culture of corruption," it said.

"The sordid facts of the present case demonstrate total anarchy in the governance of the state of Haryana, wherein more than 50 senior and seasoned public servants posted across various districts in the department of education consciously indulged in commission of act of forgery at the behest of their superiors who all were integrally part of the well designed conspiracy to give effect to this employment scam of vast magnitude.”

"The second set of award lists were consciously created in the year 2000 (end of August and early September) and substituted for the original award lists after breaking open the sealed almirah. The acts highlighted above exhibit contrivance and brazen criminal misconduct, committed consciously to execute the ends of conspiracy. The argument on omission to obtain sanction is, therefore, rejected," it said.

Dealing with the role of bureaucrats, the single-judge bench said that being public servants, they had a bounden duty to uphold the law and fiercely protect the confidence bestowed upon them on taking charge of their office but they chose to "flagrantly violate the law".

"The very nature of the present crime, its magnitude, ramifications, designed manner of execution and the deleterious impact on the society at large, warrants a strict view, lest, justice be rendered sterile," the court said.

"In the instant case, these appellants (three) were entrusted with the task of judging merit of prospective junior teachers and awarding them with appointments. They, however, were pressurised by their bosses to aid and assist in preparation of another list devoid of any merit. They succumbed to the pressure and resultantly this scam was able to have far reaching effect in all 18 districts in Haryana. As fate would have it, the scam was unearthed and the guilty have been convicted," it said.

The high court also modified the jail term of the 45 convicts, who were earlier given four years imprisonment by the trial, to two years, saying that they "were under immense pressure to commit these crimes".

It further said in the present case, the subsequent appointments were made on the basis of "fake award lists". The court said that the case is not of "mere innocuous ante-dating of a document by its authorised maker but of fraudulent creation of a document giving an impression that it was created much earlier in time than it was actually created and having drastically different contents than the documents for which it was substituted.

"The fact that such document created later in time and had drastically different contents than the original document signifies the fraudulent purpose for its creation." The five-time former chief minister and his son Ajay were sitting MLAs at the time of conviction in 2013.

The conviction and sentence had come under sections 120B (criminal conspiracy), 418 (cheating), 467(forgery), 471 (using forged documents as genuine) of the IPC and sections 13(1)(d) and 13(2) of the Prevention of Corruption Act in the case relating to illegal recruitment of 3,206 junior basic trained teachers.