Those who have recovered from COVID-19 respond faster to the Covishield vaccine and reach high antibody levels, says a study, leading to hopes that they may not need a second dose and therefore help widen India's corona immunisation cover. 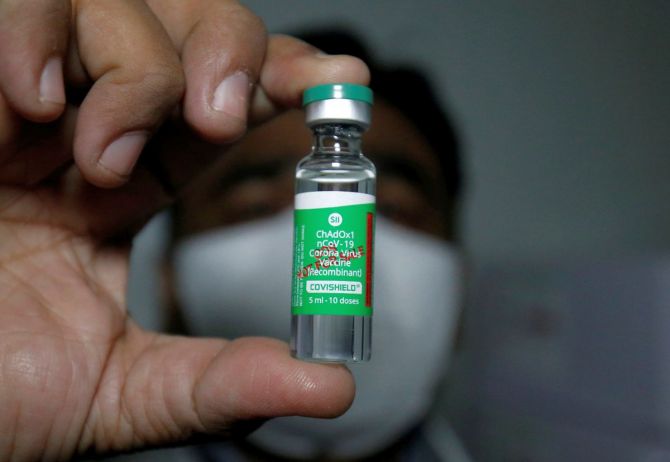 The study on the immune response to Covishield was carried out by researchers from New Delhi's CSIR-Institute of Genomics and Integrative Biology (IGIB), Max Super Speciality Hospital and Institute of Endocrinology, Diabetes and Metabolism as well as the Academy of Scientific and Innovative Research (AcSIR) in Ghaziabad.

Covishield is inducing a robust immune response. Those who are seropositive at baseline respond faster and reach higher antibody levels, CSIR-IGIB Director Anurag Agrawal, one of the authors of the study, told PTI.

Seropositivity is an indicator of the presence of the virus in the serum, or evidence of previous exposure to it.

The Oxford-AstraZeneca's COVID 19 vaccine, or ChAdOx, is an important part of the global vaccine roll-out.

Covishield, a locally manufactured version by Pune's Serum Institute of India, is one of the two vaccines along with the indigenous Covaxin, from the Hyderabad-based company Bharat Biotech, approved for use in the country.

In the vaccine, scientists have engineered a version of adenoviruses that infect chimpanzees to carry the gene responsible for the spike protein of the novel coronavirus, which it uses to enter the human cells.

The adenoviruses are common viruses that cause a wide range of illnesses and symptoms such as colds, sore throat, bronchitis, pneumonia, diarrhoea.

The new study, posted online on preprint repository medRxiv and not peer-reviewed, estimated the effectiveness of the first dose of Covishield in generating antibody response.

Researchers measured antibodies to SARS-CoV-2 directed against the spike protein in the 135 healthcare workers administered Covishield.

Antibody levels were quantitatively measured at 0, 7, 14, 28 days after the first dose of the vaccine, said Agrawal.

The team found differences in the levels of antibodies among immunised individuals who were already seropositive, compared to those who were not.

In 44 people who had already developed antibodies to SARS-CoV-2 at day 0 (before immunization), the antibody response was significantly higher, with the maximum increase seen between days 0 and 7, the researchers said.

The average antibody response at 28 days in seronegative subjects was similar to that of seropositive subjects at baseline (day 0), and was on a rising trajectory, they said.

'Our data suggest that ChAdOx1 is highly immunogenic, particularly so where previous SARS CoV2 antibody-response is established,' the authors of the study noted.

'Given the high background seropositivity in India, this may be useful in determining the optimal timing of the second dose during mass immunization within the constraints of vaccine supply and administration,' they said.

Reacting to the findings, immunologist Vineeta Bal, who was not involved in the research, said the study sample size is small.

Though a single dose of Covishield is not enough to trigger adequate immune response in everyone, making a booster dose necessary, it is enough in individuals already exposed to SARS-CoV2, she noted.

"They may not need the second dose and hence those doses can be spared to increase coverage," explained the scientist from Pune's Indian Institute of Science Education and Research.

"This number, the immunologist said, could be as high as 30 per cent of all the population based on the results of sporadic serosurveys available in the public domain from India.

"Thus there is some logic in doing spot-check for pre-existing antibody before vaccination," she added.

Agrawal said the study supports the effectiveness of India's vaccination programme and helps in determining the timing of the second dose.

"By 28 days, there was a good immune response in almost all of our participants. This needs to be confirmed further and may lengthen our window for the second dose, especially in communities with high seropositivity rates," he explained.

A caveat in the data, Bal noted, is that whether pre-immune individuals were asymptomatic RT-PCR positives, or suffered from the disease, is not mentioned.

"A wide range of antibody titres is seen and making some correlation between the severity of disease and immune response would have been nice, even if it was only a weak association because of limited numbers," she added.

The 'antibody titer' is a test that detects the presence as well as quantitatively measures the 'anti-bodies' within a person's blood.

On Monday, India opened up its vaccination programme to all those above 60 and people from 45-59 who suffer from specified co-morbidities.

Shakoor Rather
© Copyright 2021 PTI. All rights reserved. Republication or redistribution of PTI content, including by framing or similar means, is expressly prohibited without the prior written consent.