Maharashtra on Monday reported 178 more COVID-19 deaths, the highest spike in a single day including 68 from worst-hit Mumbai, taking the number of fatalities to 4,128, a health official said. 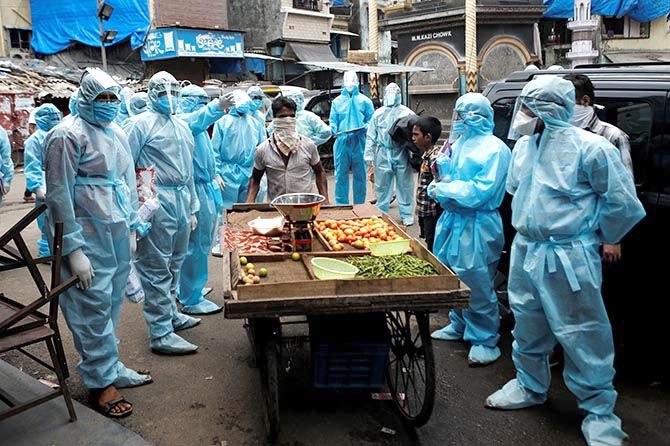 IMAGE: A vegetable vendor pushes his handcart past healthcare workers wearing personal protective equipment after a check up for the coronavirus disease (at a slum in Mumbai. Photograph: Francis Mascarenhas/Reuters

In a kind of relief, record 5,071 patients were discharged in a single day, leading to the overall count surpassing the number of active cases in the state for the first time.

"While the number of active cases stands at 50,554, the count of the people discharged after complete recovery stands at 56,049," the official said.

Of the 178 fatalities, 68 patients were from Mumbai, 20 from Vasai Virar, 14 from Pune, 13 each from Dhule and Mira Bhayandar, 12 each from Navi Mumbai and Thane city, nine from Kalyan Dombivli, three from Jalgaon, two each from Solapur and Jalna. One death each was reported from Palghar, Raigad and Ratnagiri, he said.

"Of the 178 deaths, 29 have been occurred in last two days while the rest 149 casualties had occurred earlier," the official said.

Thane division, which includes Mumbai, now has 82,433 cases while the fatality count stands at 2,873, he said.

Kolhapur division has so far reported 1,566 cases and 32 deaths while Nashik division has 4,534 cases with 291 deaths, he said.

The number of cases in Aurangabad division is 3,390 and fatalities 147. Latur division has 647 cases with 25 deaths, he said. Akola division has so far reported 1,745 cases and 71 deaths while Nashik division accounts for 1,280 cases and 14 fatalities, the official informed.

A total of 89 COVID-19 patients from other states have so far received treatment in Maharashtra. 20 of them have died, he added.