Rebel Karnataka Congress MLA Roshan Baig was released in Bengaluru from detention on Tuesday after several hours of questioning from Monday night by the special investigation team probing the alleged IMA ponzi scheme. 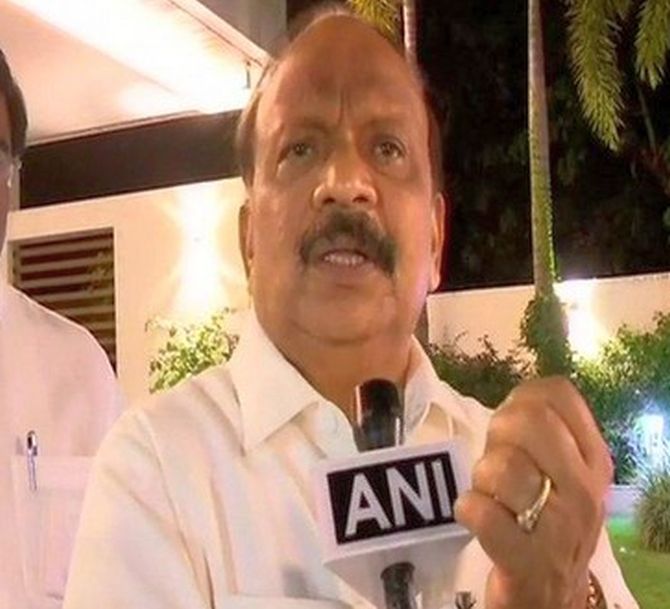 Baig, detained by sleuths of the team before he was to board a chartered plane to an unknown destination from the Bengaluru airport, let go with a rider that he will have to turn up on July 19 for further questioning, SIT sources said.

The SIT had asked Baig, to appear before it on July 15 but he did not turn up citing important works and had instead said he would be available on July 25.

The MLA was quizzed for the whole night Monday and was released at about 12.30 pm Tuesday, the sources said.

"He was taken for enquiry. He has been asked to appear on July 19," a police officer in the SIT said.

Speaking to reporters after coming out of the SIT office, Baig said there was some confusion in the SIT due to which he was detained.

The MLA added he would cooperate with investigators and appear before them on July 19 as well.

Baig claimed the SIT has permitted him to travel anywhere in the country.

"I wanted to fly from here to Pune last night but they were under some confusion that I am running away. It was deliberate. Some people played mischief but I will not blame anybody," Baig said.

The rebel Congress MLA, suspended from the party for his "anti-party activities", is among the 16 legislators of the ruling combine who have tendered their resignations from the assembly.

It was alleged Baig was about to fly to Mumbai to join other rebel MLAs camping there but he refuted the charge saying, we was on the way to Pune for some "personal work".

Kumaraswamy had cited it as a case of BJP's attempt to destabilise his government by poaching the MLAs of alliance partners the Congress and the Janata Dal-Secular.

The BJP rejected the charge and said Santhosh was not there.

In a big jolt to the ruling coalition, sixteen MLAs have resigned from the assembly while two independent lawmakers extended their support to the BJP, bringing the government on the verge of collapse.

A former minister in the previous Siddaramaiah government,Baig landed in the IMA controversy after the company owner Mohammed Mansoor Khan, facing charges of duping thousands of investors, alleged the Congress MLA took Rs 400 crore fromhim but did not return it.

Baig has dismissed the charges as "baseless and frivolous".

Baig has been sulking for quite sometime and had flayed party leaders Siddaramaiah and state president Dinesh Gundu Rao for the party's poor show in the Lok Sabha election.

He was recently suspended for "anti-party" activities.