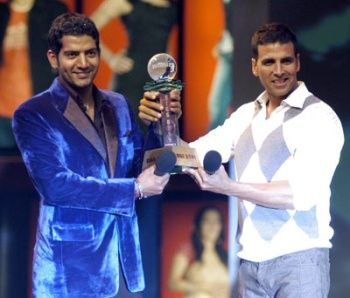 IMAGE: Ashutosh Kaushik getting the Bigg Boss 2 trophy from actor Akshay Kumar in 2008.

Claiming 'right to be forgotten', reality show celebrity Ashutosh Kaushik on Thursday sought a direction from the Delhi high court to the Centre and Google that some of his videos, photos and articles be removed from various online platforms as they have a "detrimental effect" on his life.

Justice Rekha Palli issued a notice and asked the ministry of information and broadcasting, Google LLC, Press Council of India and Electronic Media Monitoring Centre to respond to the petition which said the petitioner was invoking the ”right to privacy” and the ”right to be forgotten”.

The court asked the authorities to file their replies within four weeks and listed the matter for further hearing in December.

Kaushik, who had won the MTV Hero Honda Roadies 5.0 in 2007 and second season of Bigg Boss in 2008, sought direction to the Centre to take urgent steps to safeguard his reputation and dignity by removing his videos, photos and other related articles from various online platforms which are being facilitated by Google as the same is engendering a detrimental effect on his life and personal liberty.

The plea said the ’Right to be Forgotten’ reflects the claim of an individual to have certain data deleted so that third persons can no longer trace them and it enables a person to silence the past events of his life that are no longer occurring.

”Thus, the ’Right to be Forgotten’ entitles individuals to have information, videos or photographs about themselves deleted from certain internet records so that search engines cannot find them,” it said.

The plea said that though the Constitution of India does not expressly recognise the ’Right to be Forgotten’, the Supreme Court has held that ’Right to Life’ includes personal liberty and thus, right to privacy culled from Article 21.

’Right to be forgotten’ is in sync with the right to privacy, which was hailed by the Supreme court as an integral part of Article 21 (right to life) of the Constitution, it said.

Advocate Amit George, representing Kaushik, submitted that whenever his name is searched on Internet, photos relating to his past life continued to be shown on various search engines including Google and urged the court for the removal of all such posts, videos and photos relating to him.

Senior advocate Arvind Nigam, representing Google, said the right to be forgotten was not yet a law in the country.

The petition said Kaushik's valuable contribution in the television and big screen industry has earned him accolades, love and appreciation of people across India.

"However, despite attaining outstanding success in the silver screen industry, under deep agony the petitioner had to suffer utmost psychological pain for his diminutive acts, which were erroneously committed a decade ago as the recorded videos, photos, articles of the same are available on various search engines/ online platforms,” said the petition filed through advocates Akshat Bajpai, Ishanee Sharma and Shreya Gupta.

The plea sought to direct the authorities to take effective and time-bound action in removing all the posts, videos, articles written under Kaushik's name, which are irrelevant in the present times and are causing grave injury to his dignity and reputation.

He sought to avail the 'Right to be Forgotten' to safeguard his life, liberty, dignity and reputation.

The photos, videos and articles relate to he being taken into custody for the alleged offence of drunken driving in 2009.