In what may spark a controversy, villagers of Darogar Alga char in Assam's Goalpara district alleged that they tore down a madrasa on instruction from the police, a charge which the superintendent of police dismissed as baseless. 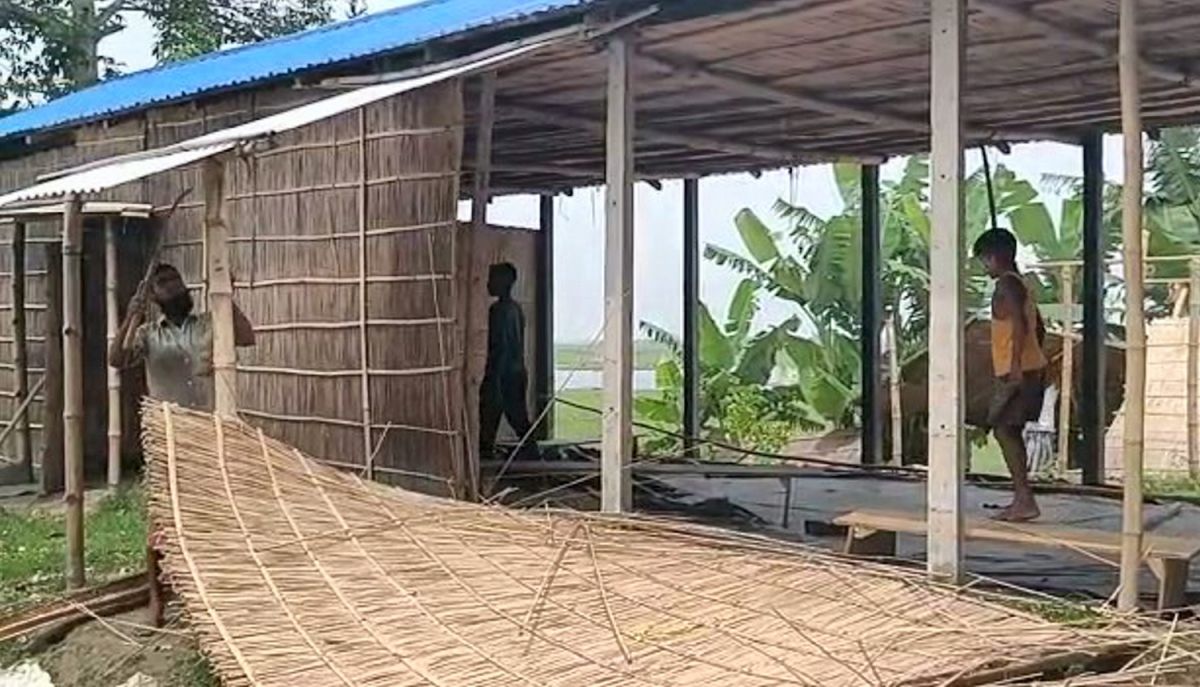 IMAGE: Locals demolish a madrasa and a house adjacent to it in protest against the alleged use of the institute's premises for 'jihadi' activities, in Goalpara district on September 6, 2022. Photograph: TV grab/PTI Photo

The locals asserted that the communication was sent to a fellow villager having connections in the force and it was he who asked people to pull down the structure.

The police, however, denied the charge saying they were only investigating a case of alleged terror links of two persons, now absconding, who were teaching at the seminary.

According to the police, the Darogar Alga madrasa and a reed house on its premises were demolished on Tuesday by the villagers themselves after the emergence of "suspected jihadi links" with its two teachers, who were reportedly Bangladeshis.

“I was among those who pulled down the two structures. I was working in my jute field on the riverside when Shukur Ali (a villager) called me to the madrasa compound. He asked me and five-six others to help him demolish them," Rahim Badshah, a local, told PTI.

Ali is a self-proclaimed Bharatiya Janata Party worker in the sandbank. His motorcycle carries a lotus (BJP party symbol) sticker. Several such stickers are also visible on the walls of his residence.

When asked, Ali accepted that the media was invited beforehand to cover the demolition and the structures were pulled down in front of them.

However, he was silent on the police asking him to demolish the madrassa.

When approached for his comment, Goalpara Superintendent of Police V V Rakesh Reddy said the force had "absolutely no role" in bringing down the seminary and the adjacent temporary one-room house.

"From our side, there was no communication for the villagers saying that they proceed with it (demolition). Had it been planned, the district administration would have taken the steps accordingly,” Reddy told PTI over the phone.

Reddy said that the villagers never thought the madrasa teachers who had left suddenly had links with terror outfits.

“That the teachers were Al-Qaeda jihadis was a piece of shocking news for them. We are only investigating that case. We visited the place many times before to collect statements of the villagers,” he said.

On Monday evening, Ali had reportedly called a few village elders at the madrasa compound and claimed that the DSP of Goalpara had sought demolition of the two structures.

One of the villagers, who attended the gathering, claimed to have recorded the entire conversation on his mobile phone.

"Ali had told us that the DSP and the local police station in charge were on the way to meet us on Monday night. He was continuously on the phone and after some time said they were not coming," the villager told PTI on condition of anonymity.

The SP, when asked, said he was not aware of the meeting and so he "cannot comment on speculations".

“I think whatever is happening in other districts might have acted as a trigger, but we are not sure,” the SP said.

Demolishing the madrasa by the Darogar Alga villagers was in contrast with the three cases of Morigaon, Barpeta and Bongaigaon where the respective district administrations pulled down the seminaries following arrests of teachers for their alleged links with terror groups.

Another villager Soinuddin Sheikh said, "On Tuesday morning, Ali told me that a police officer will come after some time and we should demolish the madrasa before his arrival. I had cut some knots of the reed walls of the house and left for my work. I was not present when the madrasa was brought down."

Somesh Ali of Darogar Alga confessed that the structures were demolished because the villagers got scared of Ali's alleged message from the police and did not want the force to enter their char with heavy equipment like bulldozers.

"The madrasa was built with public money. If we break it, the materials can be used again for other purposes. That is why we decided to pull it down before police arrived," he added.

He stated that around six men demolished the structures within half an hour at around 9:30 am on Tuesday and a crowd of around 25-30 people, mostly women, were present, as the men folk had left for work.

Somesh Ali and Badshah alleged that Ali took away all the materials of the reed house, where the two alleged Bangladeshi nationals lived, to construct a clubhouse as per the "instructions of the DSP sir".

Loose sheets of tin and reed walls were seen lying at Ali's house, about 200 metres from the madrasa compound.

Ali, when asked, did not respond to the allegations.

Tridip Lahkar
© Copyright 2023 PTI. All rights reserved. Republication or redistribution of PTI content, including by framing or similar means, is expressly prohibited without the prior written consent.