Amarinder relents on question of Sidhu's elevation as PCC chief

Any decision taken by Congress president Sonia Gandhi will be acceptable to all, Punjab Chief Minister Amarinder Singh said on Saturday as talk of Navjot Singh Sidhu being appointed chief of the party's state unit despite his oft-stated reservations gathered force. 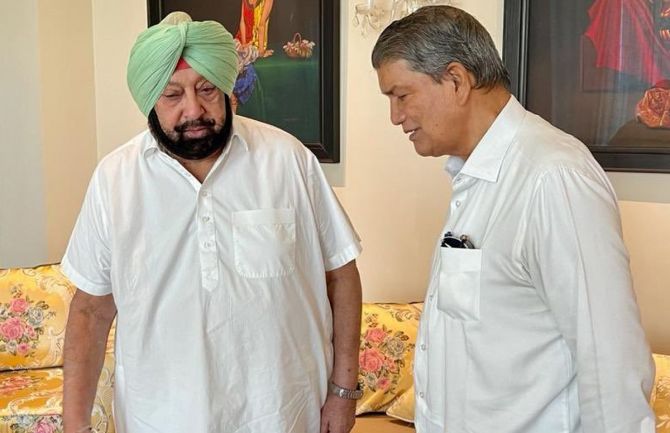 The cricketer-turned-politician held a series of meetings through the day with Punjab Pradesh Congress president Sunil Jakhar as well as several MLAs, including loyalists of the chief minister, fuelling further speculation about next steps in the dissension-riven Punjab Congress that has long been caught in the Sidhu-Amarinder feud.

Amarinder Singh's statement came after his meeting with All India Congress Committee general secretary and Punjab in-charge Harish Rawat, who flew down to Chandigarh in what was seen as an effort to placate the chief minister.

The chief minister also said he raised 'certain issues' with Rawat during the 'fruitful' meeting at his farmhouse in Mohali.

''Had a fruitful meeting with @harishrawatcmuk. Reiterated that any decision of @INCIndia President will be acceptable to all. Raised certain issues which he said he'll take up with @INCIndia president', @capt_amarinder,' according to a tweet by Amarinder Singh's media advisor.

According to sources, Amarinder Singh is learnt to have told Rawat that he will not meet Sidhu till he publicly regrets or apologises for his tweets against him.

The chief minister is learnt to have told Rawat that the manner in which the issue was handled was not acceptable and he still has reservations over Sidhu's appointment but would accept any decision that the leadership takes, the sources said.

Sidhu has been critical of Amarinder Singh after the Punjab and Haryana High Court in April quashed a probe into the 2015 Kotkapura firing case.

Sidhu had questioned the alleged 'deliberate delay' in ensuring justice and had accused Amarinder of evading responsibility in the 2015 sacrilege case.

Rawat did not give away details of the meeting either.

"One thing is very clear... Captain Amarinder Singh ji who had earlier made a 'mahan' (great) statement that that whatever decision will be taken by the Congress president will be honoured by him reiterated that statement today," Rawat told reporters.

Later, he took to Twitter and said, 'I have just returned to Delhi after meeting Amarinder Singh ji. I am happy that many things which are being discussed outside have proved to be completely baseless.'

'Captain Sahib has again reiterated his important statement, in which he has said that whatever decision the honorable Congress president takes with regard to the post of Punjab Congress president, it will be acceptable to me and I will respect it. Thank you Captain for your great statement,' he also said while sharing his picture with the chief minister.

On Friday, Amarinder Singh wrote a letter to Sonia Gandhi.

He is learnt to have said that giving the post of state party president to Sidhu, a Jat Sikh, would upset senior leaders representing the Hindu community and harm the Congress' prospects in the 2022 assembly elections.

While the party high command maintained studied silence on the matter, Sidhu had a busy morning.

After the meeting, which lasted for more than half an hour, both came out smiling and hugged each other. Sidhu dubbed Jakhar his elder brother and a guiding force.

After Jakhar's residence, Sidhu headed to Chandigarh, about 20 km away, to meet other party senior leaders as well as several ministers, including Health Minister Balbir Singh Sidhu and senior party leader Lal Singh who are considered close to Amarinder Singh.

Randhawa told reporters "all is well" in the party and recalled his family's relations with Sidhu.

'Seeking guidance of Presidents of the illustrious Punjab Pradesh Congress Committee � Conversations with wise men, worth months of Education!,' said Sidhu in a tweet.

Later in the day, Sidhu met several party MLAs at his residence in Patiala.

On Friday, Sidhu had also met Gandhi at her residence in New Delhi on Friday in an apparent bid to arrive at a truce formula over the state unit revamp.

Suspense has been building up over the much-awaited announcement from the party high command on the resolution of the festering feud in the Punjab Congress.

In case the party chooses to appoint Sidhu as Punjab Pradech Congress Committee (PCC) chief, there will be two Jat Sikhs in key posts. While Amarinder Singh is also a Jat Sikh, Jakhar is a Hindu.

There is also talk of appointing two working presidents--a Dalit and a Hindu face -- to balance caste equations.

Though there was no official word, Sidhu's supporters were upbeat at reports that he would be given the key post and there were reports that preparations for celebrations were already underway.

Rawat had maintained that the central leadership is working out a peace formula where both leaders could work together to help the party win the Punjab Assembly polls next year.

The Congress had set up a three-member panel, headed by leader of opposition in Rajya Sabha Mallikarjun Kharge, to resolve the infighting in the Punjab unit. Both Sidhu and Amarinder Singh had also met the panel.

The rival leaders have often aired their differences in public and made statements against each other.

Amid reports of Sidhu's elevation, party MP Manish Tewari has batted for a Hindu face for the PCC chief's post while giving details of the composition of the state's population.

'Punjab is both progressive and secular but balancing social interest groups is key. Equality is the foundation of social justice!' he said in the tweet, while giving details of Punjab's demography.

Sikhs, he said, constitute 57.75 per cent of the population, while Hindus and Dalits constitute 38.49 and 31.94 per cent respectively.