Raut would have got cleaned in 'washing machine': Sena's dig at BJP

The Shiv Sena on Tuesday slammed the Bharatiya Janata Party over the arrest of Sanjay Raut by the Enforcement Directorate, saying such targeting of the Opposition did not happen even during the Emergency imposed by the then prime minister Indira Gandhi. 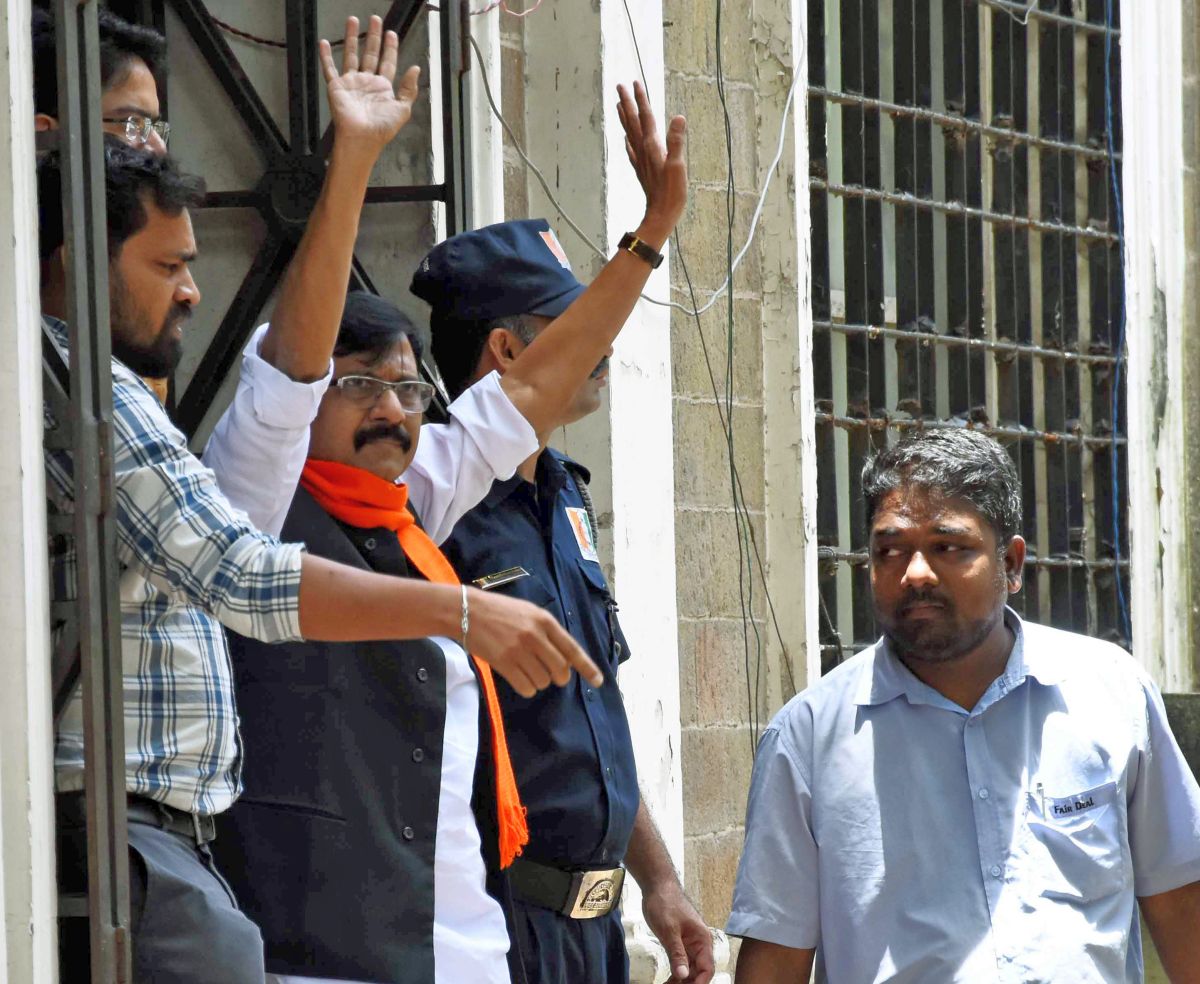 IMAGE: Shiv Sena leader Sanjay Raut raises his hands as he is being taken for a medical check-up at JJ Hospital by ED officials in Mumbai. Photograph: ANI Photo

In an editorial in the party mouthpiece Saamana, the Sena said democracy and a country perish if the Opposition is not treated with respect.

Raut was arrested by the Enforcement Directorate on Sunday night in connection with a money laundering case emerging from a chawl redevelopment scheme in Mumbai.

He was remanded in ED custody till August 4.

The Sena said Raut, Raya Sabha MP and Saamana executive editor, was arrested out of political revenge and many "false proofs" were produced to frame him in the alleged Patra chawl case.

Had Raut aligned with the BJP, he too would have got cleaned in its “washing machine”, the edit said.

Questioning the "haste" in arresting Raut, the Sena said he had submitted a letter to the ED stating he will appear before the anti-money laundering agency post the monsoon session of Parliament and the Vice Presidential elections, but the ED didn't consider it and raided his residence on Sunday morning.

“People in power have decided to chop off the tongues or strangle those who speak the truth. This never happened even during the Emergency imposed by Indira ji,” the edit said.

Many Opposition leaders, political workers, and journalists were arrested during the Emergency in 1975-77.

In another swipe at BJP, the Sena said when notices were issued by central agencies to Opposition leaders, alleged economic offenders like Nirav Modi, Mehul Choksi, and Vijay Mallya fled the country.

It also slammed the rebel group led by Chief Minister Eknath Shinde, saying the MPs and MLAs who are now speaking the “words of courage” are under the radar of the ED and Income Tax.

“All these people are talking like saints today," the party said.

The Sena recalled Raut had submitted a letter to Rajya Sabha Vice Chairman Venkaiah Naidu six months ago stating that he was approached by certain people who asked him to assist in toppling the then MVA government in Maharashtra or else he has to face the consequences.

"Those who kept the sword hanging toppled the Thackeray government. This chronology has to be understood,” the Sena said.

After Raut was arrested, Shiv Sena chief Uddhav Thackeray on Monday described him as a hardcore Shiv Sainik of Bal Thackeray who did not succumb to pressure.