Rapists need to be lynched: Jaya Bachchan on vet's rape-murder

Death penalty for rapists, lynching of convicts in public and castration of those convicted were among demands made in Rajya Sabha on Monday as MPs expressed outrage over the Hyderabad rape and murder case and other such incidents in the country. 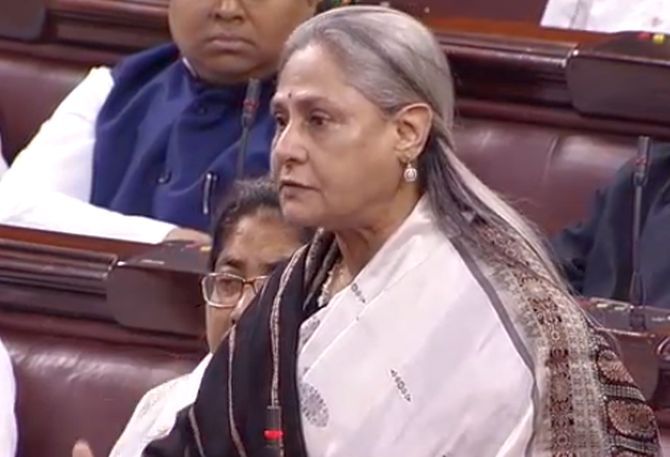 Chairman M Venkaiah Naidu rejected adjournment motions on the gang rape and murder of a young woman veterinarian in Hyderabad but allowed members to make brief mentions on the same and other such incidents elsewhere in the country.

Members cutting across party lines condemned the recent spurt in crime against women and demanded stringent laws that punish the guilty within a fixed time-frame.

While Naidu described the Hyderabad incident as a disgrace to humanity, Leader of the Opposition Ghulam Nabi Azad said the society will have to tackle this problem at its root.

The guilty should be given stringent punishment without any discrimination of religion or caste, Azad said.

Samajwadi Party's Jaya Bachchan wanted security personnel in-charge of the area in Hyderabad where the crime took place be held accountable and questions be asked.

She said the rapists should be "brought out in public and lynched."

WATCH: Jaya Bachchan on the outrage over Telangana vet rape-murder

Dravida Munnetra Kazagham’s P Wilson said courts should be empowered to surgically and chemically castrate convicted rapists before they are released from jails so as to check repeat offenders.

The cost of such procedure should be recovered from the accused by selling his assets, he said, adding list of sexual offenders should also be made public.

Mohd Ali Khan of the Congress wanted timelines be set for trial of accused in fast track courts and the accused not be given an religious colour.

The accused in the Hyderabad incident belong to four separate religions and not one, he said.

Sanjay Singh of the Aam Adami Party said stringent action in all cases of sexual assault on women should be taken after a trial in fast track court and punishment given within a timeframe.

Amar Patnaik of the Biju Janata Dal demanded death for such heinous crimes.

While T K Rangarajan of Communist Party of India-Marxist said laws be framed to tackle crime are not percolating down, Vaiko of the DMK wanted concrete action be taken to deal with such crimes.

Santanu Sen of the Trinamool Congress wanted strong steps be taken for give out exemplary punishment to the guilty.

Raising the issue of delay in police action in the Hyderabad incident over jurisdiction dispute between police stations, Kanakamedala Ravindra Kumar of the Telugu Desam Party wanted capital punishment be given to the rapists in public.

While Rashtriya Janata Dal’s Manoj Kumar Jha said deterrence is not enough, R K Sinha of the BJP said capital punishment is yet to be given to the guilty of the 2012 gang rape and murder of a
young woman in Delhi due to appeals in the case.

Vijila Sathyananth of the AIAMDK demanded fast track courts to trial in rape cases as well as a complete ban on sale of drugs that was fuelling such incidents.

The charred body of the 25-year old woman, who worked as an assistant veterinarian at a state-run hospital, was found under a culvert in Shadnagar in Hyderabad on November 28, a day after she went missing.

Four men, all lorry workers, aged between 20 and 24, were arrested on November 29 on charges of raping and killing the woman and had been sent to judicial custody for 14 days on Saturday.