From sprucing up the sprawling ground to extensive traffic and security arrangements, workers and authorities were busy making final preparations at the historic Ramlila Maidan in New Delhi for the swearing-in ceremony of Arvind Kejriwal as chief minister of Delhi for the third successive time on Sunday. 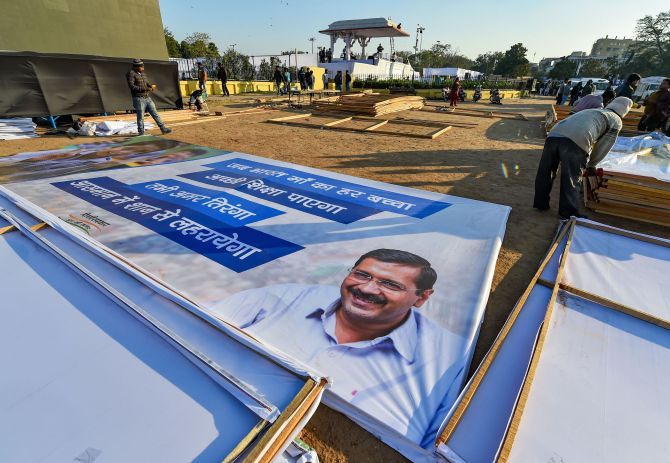 IMAGE: Preparation underway at Ramlila Maidan ahead of the oath-taking ceremony of the AAP government, in New Delhi, on Saturday. Photograph: Arun Sharma/PTI Photo

Big banners bearing messages like 'Dhanyawad Dilli' along with the image of the Aam Aadmi Party supremo were put up on Saturday in and around the venue ahead of the mega function which is 'open to public'.

With AAP scripting its third consecutive win in the Delhi assembly elections, excitement is palpable among party workers and senior leaders alike, all of whom are expecting a huge crowd at the event.

Around 50 people from different walks of life who are responsible for 'Delhi nirman' will share stage with Kejriwal during his swearing-in ceremony, AAP leader Manish Sisodia said.

He said these people would include teachers, bus marshalls, architects of the Signature Bridge and families of fire fighters who lost their lives.

Prime Minister Narendra Modi has been invited to the ceremony, besides Bharatiya Janata Party MPs and MLAs from Delhi.

The AAP had said no chief minister or political leader from other states will be part of the event as it will be a 'Delhi-specific' ceremony.

On the eve of swearing-in ceremony, Kejriwal called a dinner meeting of his ministers-designate to discuss the roadmap for Delhi's development, especially the initiatives that need to be prioritised in the coming three months, according to party functionaries. 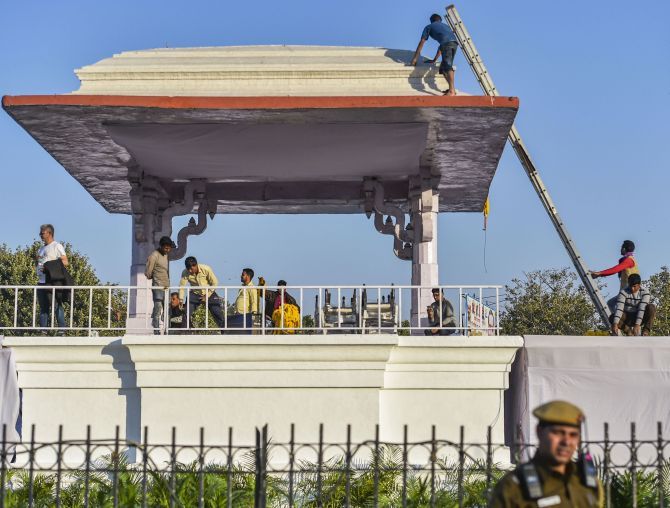 Workers were on Saturday giving a fresh paint job to the white ceremonial platform at the Ramlila Maidan, and the area around it was being decked up with potted plants and flowers.

A large contingent of security personnel was given briefing by Delhi Police authorities at the Maidan.

Officials said 2,000 to 3,000 security personnel from the Delhi Police and paramilitary forces, including the Central Reserve Police Force, were being deployed for the ceremony which is scheduled to begin at 10 am. Drones were likely to be used for aerial surveillance.

Traffic regulations will be in place in the area from 8 am to 2 pm, they said.

Senior AAP leader Gopal Rai said as this is an event open for public.

"We are expecting a good number of people to turn up tomorrow," he said.

'Baby Mufflerman' Aavyan Tomar, who stole the hearts when he dressed up as the AAP convenor on counting day, is a 'special invitee' at the ceremony.

The AAP supremo had on Thursday extended invitation to Delhiites to attend his oath-taking ceremony to 'bless their son'. 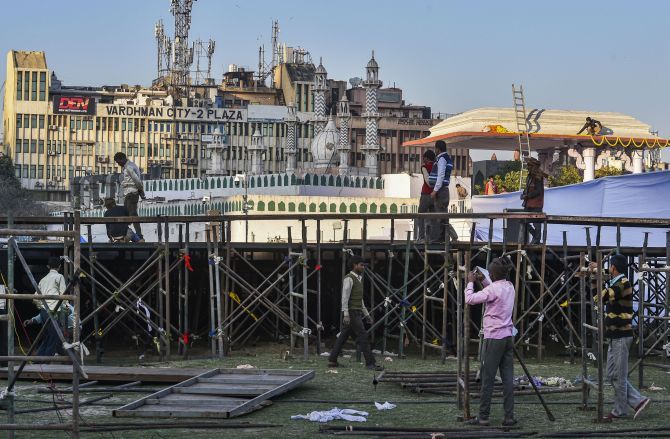 IMAGE: The AAP had said no chief minister or political leader from other states will be part of the event as it will be a 'Delhi-specific' ceremony. Photograph: Arun Sharma/PTI Photo

Rai had earlier said that all seven Delhi MPs and the eight newly-elected BJP MLAs have been invited for the oath-taking ceremony.

In a near-repeat performance of 2015, the Kejriwal-led AAP, which was floated in November 2012, retained power with a scintillating win in the just-concluded Delhi Assembly polls, trouncing its main rival BJP and completely decimating the Congress in a keenly-watched battle that took place in the midst of anti-CAA protests.

For the 51-year-old bureaucrat-turned-politician who will assume the post of Delhi chief minister for the third time, the Ramlila Maidan holds special significance as it had served as his battleground during the Anna Hazare-led India Against Corruption movement.

The Delhi government, the North Delhi Municipal Corporation, which owns the Maidan, and Public Works Department are working in tandem to make the venue ready for the occasion.

"We had levelled the ground during the PM's event that took place recently. So, other ground work is being done. The PWD is making necessary arrangements too," a senior NDMC official said. 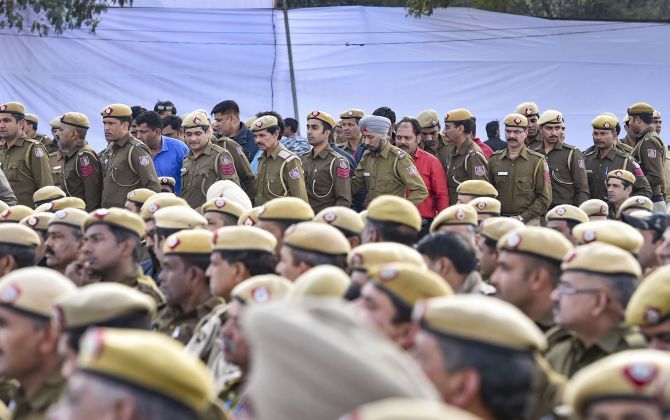 IMAGE: Police personnel attend a security briefing as part of preparation at Ramlila Maidan ahead of the ceremony. Photograph: Arun Sharma/PTI Photo

Toilet blocks are in place in and around the Maidan. Arrangements for other sanitation facilities like mobile toilets, are being done, he said.

The ground, where socialist leader Jayaprakash Narayan had addressed a massive gathering during the 'Total Revolution' movement in 1970s, has a capacity of about 1.25 lakh people.

Sources said that besides seating arrangements, there will be space for people to stand.

In 2013 after his party's first poll victory, the swearing-in ceremony was held at the same venue. Over a lakh people had attended the event on December 29 that year.

The AAP had in 2015 stunned its opponents with a massive win in the assembly polls, clinching 67 seats in the 70-member Delhi Assembly.

Kejriwal repeated his triumph in the high-profile New Delhi constituency, defeating BJP's Sunil Kumar Yadav by a margin of 21,697 votes.