Uttar Pradesh Chief Minister Yogi Adityanath on Saturday said his government would come out with a law to deal with 'love jihad' and used the Hindu funeral chant 'Ram Naam Satya Hai' to threaten those who don't respect their daughters and sisters. 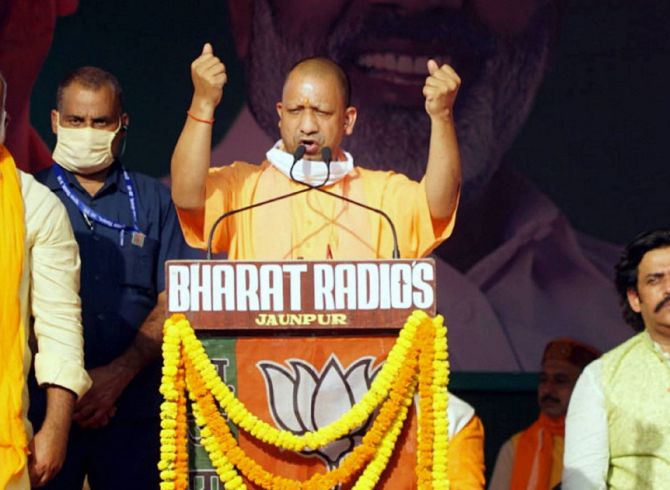 Welcoming the Allahabad high court ruling declaring that conversion for the sole purpose of marriage is not valid, the chief minister also said posters would be put up of those involved in 'love jihad', a derogatory coinage referring to the alleged campaign of Muslims forcing Hindu girls to convert in the guise of love.

"We will bring an effective law. It is my warning to those who play with the honour and dignity of sisters and daughters by hiding their real names and identities. If they do not mend their ways, their 'Ram Naam Satya' journey will start," Adityanath said.

He was addressing election rallies in Jaunpur and Deoria ahead of the November 3 by-elections for the Malhani and Deoria assembly seats.

"The posters of those involved in love jihad will be put on all road crossings," Adityanath said, sending out a warning against interfaith marriages in both his speeches.

Referring to his government's Mission Shakti programme, the chief minister said it is meant to ensure the safety, security and honour of women.

"But if anyone still dares to indulge in any misadventure, Operation Shakti is also ready," he said.

The Allahabad high court's assertion that conversion just for the sake of marriage is not valid came while dismissing the plea of a newly married couple.

The couple had approached the court to direct police and the woman's father to not disturb their marital life.

The court's verdict will be followed and the honour and dignity of women will be ensured, Adityanath said.

In Deoria, he said, an attempt was made to illegally grab the ashram of renowned religious leader Devraha Baba following which he was forced to shift to Vrindavan.

This prompted the Bharatiya Janata Party government to start building a hospital in Deoria in his name, the chief minister said.

Academic work will also start there from the next session and people of the area will also get expert medical treatment.

He claimed that the rule of the mafia and 'goonda' elements had ended in the state.]

"The Samajwadi Party chief (Akhilesh Yadav) is today worried because he had sympathy for such elements but the government has launched a drive against them," Adityanath told the gatherings.

"The government has launched Operation Mafia under which property amassed through illegitimate means are being bulldozed and seized.

"These properties, made through wrong means, will be demolished and new houses will be constructed for the poor. The land of traders will be returned," Adityanath added.

He stressed that the mafia will not be allowed to prosper in the state at any cost.

"Should those who have sympathy and support criminals and mafia get the support of people? The fate of the Samajwadi Party has already been decided in 2014, 2017 and 2019 elections," the chief minister said.

Attacking the Congress, Samajwadi Party and the Bahujan Samaj Party, the chief minister said their governments had worked on the basis of caste while the BJP government is working for all sections of the society with complete sincerity, honesty and devotion.

The chief minister alleged that the SP was desperate seeing the massive support for the BJP and was conspiring to instigate riots in the state.

But no such incident has taken place for the last three-and-a-half years nor will it be allowed at any cost.

"Those who try to sell jobs are now promptly sent to jail," he added.

The BJP is fielding Satyaprakash Mani Tripathi from Deoria and Manoj Singh from Malhani (Jaunpur). While the former was with the BJP, Malhani seat was with the SP.