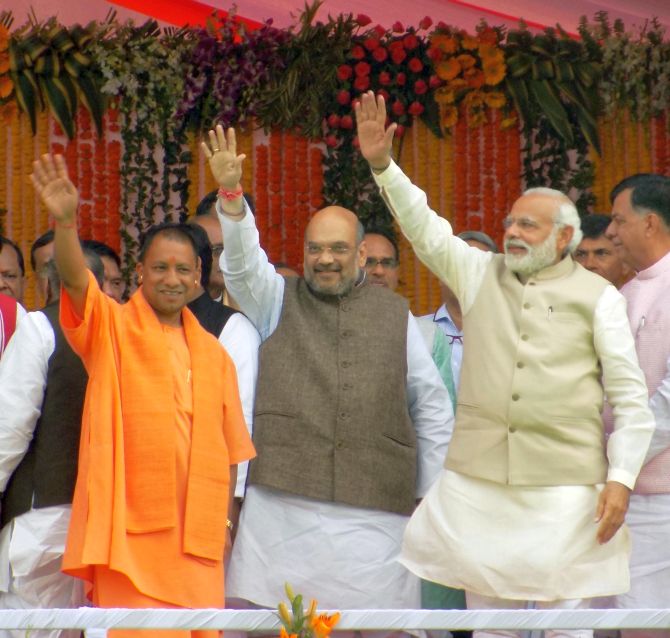 The Supreme Court verdict paving the way for the construction of Ram temple in Ayodhya has brought to the fore the decades-old Ram Janmabhoomi movement which propelled the Bharatiya Janata Party from the fringes of national politics to becoming a dominant political force as it used the deeply emotive issue to mobilise Hindus.

It came to the party's rescue again in 1990 when caste politics, fuelled by the the then V P Singh government's decision to adopt the Mandal Commission report on reservation, began to dominate Indian politics.

Advani launched his famous 'Rath Yatra' from Somnath temple in Gujarat, drawing people in their thousands as his chariot rolled through the country's heartland, at times triggering communal riots as well, while the movement gained momentum.

The demolition of Babri Masjid at the dispute site on December 6, 1992 made the party a pariah in politics for a while but could not stop its rise to power.

Speaking of the movement's role in the BJP's rise, Manindra Nath Thakur, an associate professor at the Centre for Political Studies of Jawaharlal Nehru University, told PTI, "It played a very important role. It gave a symbol to the BJP to fight elections as it did not have a proper symbol earlier, as the Congress had in the legacy of freedom struggle. Mahatma Gandhi was also a great symbol for the Congress."

The issue gave the BJP 'the symbol of Lord Ram' which it converted 'into an aggressive plank in organising the Hindu majoritarian politics', he said.

Incidentally, it was the decision to put the issue of temple construction and other core contentious matters like the Uniform Civil Code on the back burner in late 1990s in its quest to win allies to form government at the Centre that halted the BJP's political rise before the Congress ousted it from power in 2004.

It took the BJP a full decade to capture the power again after Narendra Modi, then the Gujarat chief minister, combined his aggressive Hindutva image with development plank and catapulted the party to its maiden majority in Lok Sabha in 2014 and then bettering the show in 2019.

With the apex court verdict likely to put a closure to decades-old dispute, Arun Anand, a prolific commentator and author of two books on the Rashtriya Swayamsevak Sangh, said the demand of a Ram temple in Ayodhya is 'unarguably the longest movement in the history of any civilisation'.

"The mass movement that started in 1983 not only brought greater awareness about the identity of the nation but also made a huge impact in all spheres of national life. It has created a consensus on the legitimacy of the demand to construct a Ram Temple at Lord Rama's birthplace," he said.

Hindus had begun agitating to reclaim the land from 1528 before a mass movement restarted in 1983-84, he said, adding that the community fought many battles and sacrificed lives.

It will be curious to see as to what turn the BJP's Hindutva politics takes following the verdict, according to political watchers.

Thakur cautioned that if the party now takes up the issues of other disputed holy sites like the ones in Mathura and Varanasi, then it will be 'dangerous' for politics.

However, if the judgment leads to the issue's resolution for good and the party moving on to matters like economy, then things may settle.