Rakesh Tikait asks farmers to be ready for nationwide agitation

Bhartiya Kisan Union (BKU) leader Rakesh Tikait exhorted farmers to be ready for a massive nationwide agitation over their demands as a 75-hour sit-in by the Samyukta Kisan Morcha in Lakhimpur Kheri seeking the removal of Union minister Ajay Kumar Mishra and a law on minimum support price (MSP) entered the second day on Tuesday. Samyukta Kisan Morcha (SKM) leaders will share at an appropriate moment the time, place and nature of the nationwide agitation, Tikait told the protesting farmers and called for strengthening the morcha, an umbrella body of farmer unions.

"If SKM gets weakened, governments will get the better of farmers," Tikait stressed as representatives of the BKU-Chaduni faction, which is not a part of SKM, reached the protest site to express solidarity with the agitating farmers.

Lakhimpur Kheri is represented in Lok Sabha by Mishra, the Union minister of state for home.

His son Ashish Mishra is an accused in the Lakhimpur Kheri violence on October 3 last year in which four farmers and a journalist were among eight persons killed.

Lashing out at Minister Mishra, Tikait said, "The entire country is well aware about the Tikunia violence and it was also known to all as to who was the main instigator behind it."

"It's an irony that the minister was still holding his post," he said and added the minister should be considered an accused in the violence case under IPC section 120B, which relates to criminal conspiracy to commit an offence.

After this 75-hour sit-in, the farmers must be ready for a larger agitation to press their demands, he said.

He also alleged that 'a conspiracy is being hatched in Uttar Pradesh and Uttarakhand against the Sikh community to snatch their land and the Samyukta Kisan Morcha will never allow this to happen'.

Tikait told the gathering that a 10-member delegation of the SKM, including him, was going to meet the four farmers lodged in jail and their families.

Addressing the dharna, SKM core committee member and prominent farmer leader from Punjab Darshan Singh Pal said, "The administration was not initially ready to allow the 10-member delegation to visit jail. However, it was the farmers' unity that paved the way for the meeting with the arrested farmers in jail."

The district authorities have made arrangements for water tankers and mobile toilets.

A heavy deployment of police personnel has been made in and around the Mandi Samiti to keep a close watch and maintain law and order.

Earlier in the day, Tikait and other SKM core committee members held talks over various issues at a city gurudwara.

The SKM had organised protests on Delhi's borders for more than a year against the Centre's three farm laws which were subsequently repealed. 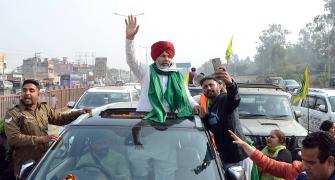 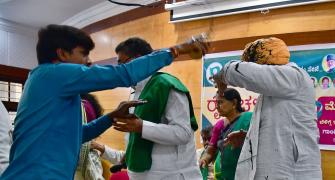 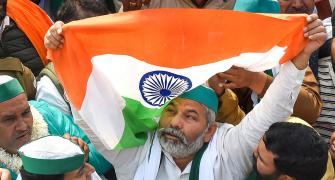 'Those who attacked me are mere pawns' 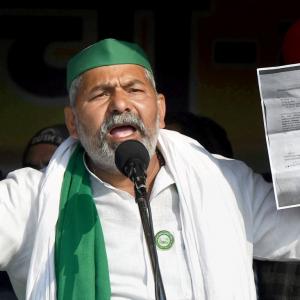