A number of opposition parties on Tuesday staged a walkout from Rajya Sabha and decided to boycott proceedings of the House till the suspension of eight members is revoked, even as the government insisted on their apology.

Later, various opposition parties, including the Congress and the Trinamool Congress, on Tuesday boycotted the Lok Sabha too in solidarity with the suspended MPs. 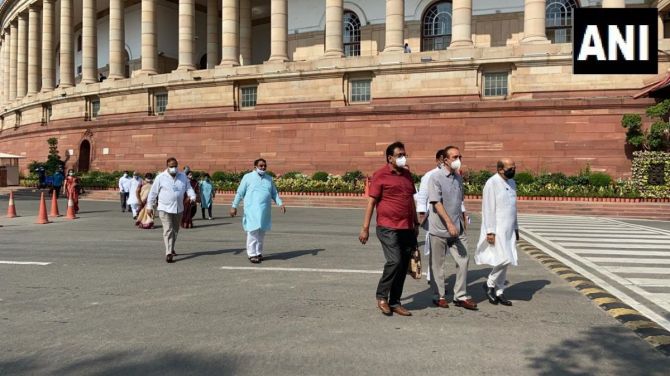 Among the parties that boycotted the proceedings of the House included the Congress, which was the among the first to walkout, followed by members of the Communist Party of India-Marxist, Communist Party of India, Trinamool Congress, Nationalist Congress Party, Samajwadi Party, Shiv Sena, Rashtriya Janata Dal, Dravida Munnetra Kazagham, Telangana Rashtra Samiti and Aam Aadmi Party.

Leader of Opposition in Rajya Sabha, Ghulam Nabi Azad, said they would boycott the proceedings till the suspension of members is revoked and also demanded that the government bring another bill to ensure that no private player should buy food grains from farmers below the MSP fixed by the government.

"The colleagues who have been suspended for the rest of the session, their suspension be revoked. Till the government does these three things, we will boycott the session," he said in the House while walking out.

Eight members of Rajya Sabha were suspended on Monday over their 'unruly behaviour' during the passage of the two key farm bills on Sunday.

Azad also said members should get more time to speak and time constraint has become a major issue of discontent among opposition parties.

Maintaining that the voice of the opposition and rights of members are not heard and bills are not sent for scrutiny to Select Committee or Standing Committees, Azad said, "I think the day before yesterday was the last straw that broke the camel's back."

The Congress leader said the government now wants "one nation, one market" with which they have no problem.

Chairman M Venkaiah Naidu lamented that the chair has been dragged into the controversy and said members should not put the blame on the chair.

Naidu made a fresh appeal to members of all opposition parties to rethink their decision of boycotting proceedings and participate in discussions of the House.

"I appeal to all members to rethink their decision of boycott and participate in the discussion," he said.

The Chairman said democracy is for debate, discussion and decision and not disruption.

He also lamented that the suspended members in an interview justified their action and showed no remorse.

Parliamentary Affairs Minister Pralhad Joshi said: "The government is not hell-bent upon keeping the suspended MPs out of the House".

"If they express regret, the government will look into it," he said on demands by some members that their suspension should be revoked and that the government should have a large heart.

Leader of the House Thaawarchand Gehlot said the suspended members tried to portray that it is the mistake of the Chair and not the opposition.

"This is not proper. Everyone is condemning that day's incident and saying it is sad. LoP also termed it sad but he tried to prove it by saying against the Chair, that the chair had taken a wrong decision. This is not proper.

"I want to bring this on record. I have 35 years of parliamentary experience, have not seen such a sad incident in my life.

"Breaking mikes, sitting on table, showing hands at Harivansh Ji, climbing on table, tearing the rule book and bill's copy. This is condemnable and sad state of affairs.

"The LoP's allegation on chair is not justifiable. The Chair's decision is supreme, its disrespect is not proper," he said.

Former PM and Janata Dal-Secular leader H D Deve Gowda said the government and Opposition should sit together to run the House.

Ram Gopal Yadav of the SP said, "A mistake has taken place by opposition members, but elders should be large hearted. I urge that their suspension be revoked and I apologise on their behalf."

K Keshava Rao of the TRS said whatever happened in the House is condemnable and 'we are sorry for it'.

Tiruchi Siva said opposition members got agitated after the chair did not allow division of votes.

Ram Chandra Prasad Singh of Janata Dal-United said, "What was their intention as they were tearing papers and throwing at Harivash babu. Division can happen only when there will be order."

They showed aggression towards Harivash, he said, adding, "It is his (Harivansh) decency that no untoward incident took place. This is not good. They disobeyed, staged dharna as if fighting for the freedom of the country. This should not be forgiven."

Praful Patel (NCP) said his party has never entered the well or did anything which is not in the best parliamentary traditions.

"We maintain a certain decorum in the House. Whatever happened, though it is unfortunate".

"In the best traditions of Parliamentary democracy... you could consider and withdraw the suspension. It will go a long way in building the trust deficit between the ruling and opposition side," he said.

Later in the day, Congress leader in Lok Sabha Adhir Ranjan Chowdhury said all opposition parties are boycotting Parliament in solidarity with the Rajya Sabha members who were suspended on Monday.

Lok Sabha Speaker Om Birla warned that members should not mention about the proceedings of the Rajya Sabha.

He said all references made by members would be removed from the records.