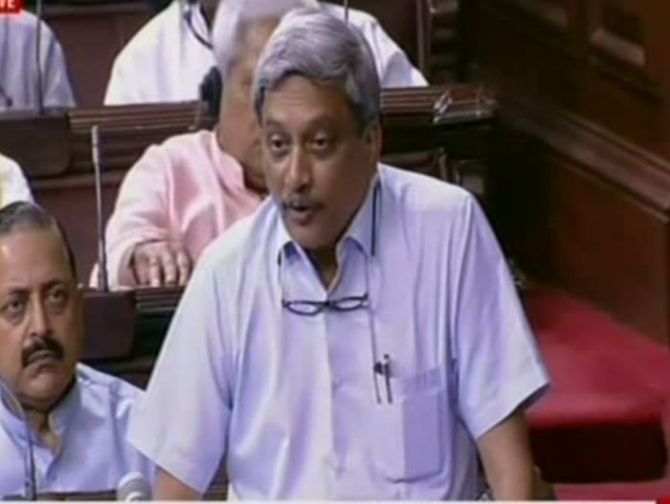 Defence Minister Manohar Parrikar on Tuesday came under Opposition attack in the Rajya Sabha for his statements on the surgical strike, India’s nuclear doctrine and other issues and sought his explanation on the issue.

The issue was raised during the Zero Hour by senior Congress member Shantaram Naik, which got support from some other members including Janata Dal-United leader Sharad Yadav. Parrikar was present in the House but did not respond.

Naik said Parrikar, in one statement, had given credit to Rashtriya Swayamsevak Sangh ideology for the surgical strikes instead of the brave soldiers, while in another statement he had said that India had never carried out before the one conducted last year.

Expressing concern over these statements by Parrikar in various platforms, Naik suggested that he should not make policy statements outside Parliament.

Parrikar never mentioned the strike that India had carried out in erstwhile East Pakistan under occupation of Pakistan dividing that country into two during Prime Minister Indira Gandhi’s tenure, the Congress MP said.

Naik also alleged that ‘the defence minister gives credit to RSS ideology for surgical strikes rather than giving credit to our brave soldiers’ and suggested that Parrikar should not ‘ridicule’ the country by making statements which can be construed to be ‘in bad taste’.

Referring to the minister’s statement on nuclear doctrine at a recent book launch, Naik said Parrikar had then ‘articulated a personal view which is contrary to India’s ‘no first use’ of nuclear weapons. This doctrine has come for adverse comments from many strategists’.

“If the defence minister is making an aggressive posture, then how is that the government had failed to ensure reciprocal visit (to Pakistan) after it permitted a Pakistani delegation to visit sensitive areas in Pathankot,” he asked.

He said ‘Pakistan attacks our military camps on several occasions, but we are asked to remain content with one surgical strike’.

Associating with his party colleague, Anand Sharma (Congress) said the defence minister should not have made policy statements on India’s nuclear doctrine outside Parliament.

“The defence minister must respect Parliament. He should be advised not to make policy statements when Parliament is in session. He should come to the House and respond,” he added.

Satyavrat Chaturvedi (Congress) and Sharad Yadav (JD-U) also wanted to air their concerns with the latter saying ‘these are not ordinary statements. They are of serious nature. He (Parrikar) should respond’.

Members from the Treasury Bench said ‘flimsy issues’ are being raised and urged the Chair not to allow Opposition members to take others’ time.