In a major crackdown against radical Sikhs and their organisations, Punjab police on Wednesday night detained several leaders and activists and banned three protest marches to be held on Thursday in support of Balwant Singh Rajoana, convict in the Beant Singh assassination case.

The total number of persons apprehended so far as a preventive measure was not yet known, the sources said adding that the detention of the leaders and activists of these organisations have been made under Sections 107/151 (apprehension of breach of peace).

The detentions were made from various districts, including Bathinda, Gurdaspur, Ludhiana and Amritsar.

The protest marches were to culminate outside the Central Jail at Patiala where Rajoana is lodged.

The preventive detentions in the state were continuing till late in the night, the sources said adding that police personnel in the state have been directed to keep a strict vigil on the supporters of the Panthic bodies to ensure that peace prevails in the state.

Normal life was disrupted in Punjab on Wednesday due to the protest bandh called by various Sikh organisations to express solidarity with Rajoana whose hanging slated for March 31 was stayed by the Centre in view of a mercy petition to President Pratibha Patil by SGPC.

The special CBI court had awarded death sentence to Rajoana and Jagtar Singh Hawara in the Beant Singh case on August 1, 2007.Three others -- Lakhwinder Singh, Gurmeet Singh and Shamsher Singh -- were sentenced to life imprisonment for hatching the conspiracy to kill Beant Singh.

The Chandigarh court had issued the death warrant to the Patiala jail authorities earlier this month, asking them to hang Rajoana on March 31.

On August 31, 1995 as Beant Singh stepped out of his office at the high-security Punjab civil secretariat in Chandigarh, a suicide bomber blew himself up, killing the then chief minister and 17 others. Rajoana was the second human bomb to be used in case Dilawar had failed in his mission.
Source: PTI© Copyright 2021 PTI. All rights reserved. Republication or redistribution of PTI content, including by framing or similar means, is expressly prohibited without the prior written consent.
Related News: Singh Rajoana, SAD Panthic, Punjab Police, Jagtar Singh Hawara, Beant Singh
Print this article
Court orders Rajoana hanging on Saturday
Akali Dal leaders are cheaters: Beant Singh's assassin
Sikhs in J&K protest against death sentence to Rajoana 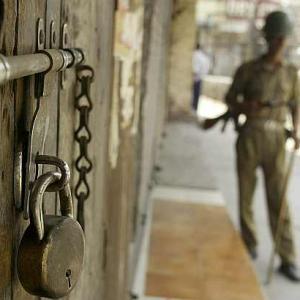