Defence Minister Rajnath Singh on Thursday visited the forward areas at Anini in Dibang Valley district of Arunachal Pradesh and interacted with the troops deployed along the Line of Actual Control. 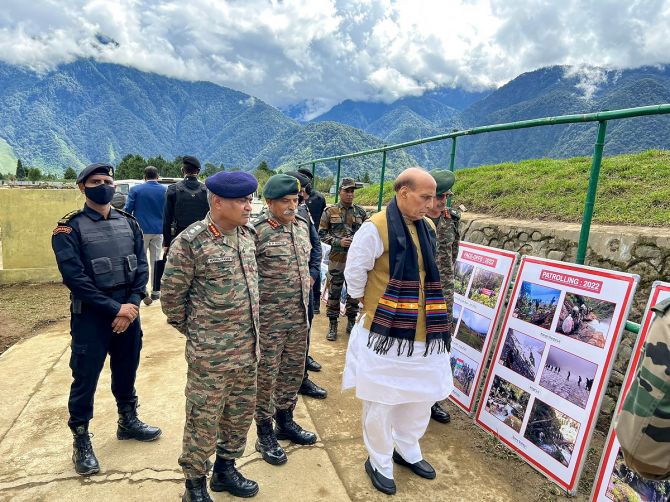 He made an on-the-ground assessment of the country's preparedness along the line of Actual Control and took stock of the entire agmut of security-related aspects, an official release said.

The defence minister visited the forward areas at a time when China is upgrading its infrastructure along the border.

China refuses to accept India's sovereignty in Arunachal Pradesh and calls it a part of South Tibet.

Singh is on a two-day day visit to forward areas in eastern Arunachal Pradesh and Assam since Wednesday.

He was briefed on the operational situation and preparedness of the Gajraj Corps by its General Officer Commanding Lieutenant General D S Rana during his visit to the military station at Tezpur, Walia said.

Singh interacted with the troops and complimented them for high standards of professionalism and dedication while safe guarding the territorial integrity and sovereignty of the country braving harsh weather conditions and inhospitable terrain, the defence spokesperson said.

In his address, Singh termed the Armed Forces as the very reason behind strength and confidence of the country, the release said.

He said the strengthening India's military prowess has been the Centre's top priority ever since it came to power since 2014 with focus on equipping the Services with state-of-the-art weapons and equipment through an 'Aatmanirbhar' defence industry .

The country's international image has been completely transformed due to the bold decisions taken by Prime Minister Shri Narendra Modi as well as the gallant deeds of the Armed Forces, the release said.

The government's efforts have resulted in making a strong military which is fully capable of protecting the Nation from all kinds of threats, he said and lauded the Armed Forces for instilling a sense of national pride and patriotism among the people, especially the youth.

"There was a time when India wasn't taken seriously on international platforms. Due to the efforts of our Prime Minister, today we have become an assertor from a mere observer. Indian military is (now) respected all over the globe. Our friendly foreign countries have trust in them. It is one of the major reasons India has emerged as a powerful nation. Today we are the fifth largest economy in the world, strongly moving forward," the release quoted the defence minister as saying.

Singh tweeted, "(I) visited the forward areas in Dibang valley of Arunachal Pradesh and interacted with the troops deployed in the region. The Indian Armed Forces personnel go above and beyond in service to the nation."

He left for Delhi in the afternoon, the spokesman added.

Singh had visited the military station at Dinjan in Dibrugarh district of Assam, the country's easternmost Army formation, on Wednesday and reviewed its operational readiness.

He was briefed on infrastructure development, capability development and operational preparedness in forward areas along the Line of Actual Control with China in Arunachal Pradesh.