After defying the Bharatiya Janata Party leadership for nearly five months, Vasundhara Raje resigned on Monday as leader Opposition in the Rajasthan assembly and may move to Delhi as party general secretary.

"I had talked to Raje yesterday after BJP President Nitin Gadkari asked me to. She agreed to submit her resignation. She is an important leader whose services will be utilised by the party," senior BJP leader M Venkaiah Naidu told PTI.

Raje said she tendered her resignation on the direction of the party high command. "Post or no-post, I have always worked for the people and my services towards them will continue," she told reporters outside the assembly.

On being asked whether she will get any party position in Delhi, she said,"Let's wait." Raje had ealier claimed the support of more than 50 of the 78 BJP MLAs in Rajasthan. As such her successor is likely to be of her choice.

BJP sources in Delhi said the resignation by 56-year- old Raje has paved the way for her to join the central unit as a national general secretary in Gadkari's team. Her resignation has come as a relief to the RSS and a section of the BJP which wanted her to quit owning moral responsibility for the party's defeat in the Rajasthan assembly elections - where Congress-led government under Ashok Gehlot replaced her regime - and dismal performance in the Lok Sabha polls.

The BJP had managed to secure only 4 Lok Sabha seats in 2009 elections, a steep drop from the 21 they won in the 2004 elections. The Congress tally, on the other hand, went up from 4 to 20. Adopting an aggressive stand, she had said that other senior leaders should also be held equally responsible for BJP's poor showing and had accused the party high command of "humiliating" her. She had also said that the party lacked democracy.

Throwing a challenge to the authority of Rajnath Singh, Raje had also sent MLAs supporting her to Delhi last year in a show of strength. Three months after her resignation was sought, Raje had put in her papers on October 23, 2009 but gave it to senior leader L K Advani.

Till a new Leader of Opposition is elected in Rajasthan, Deputy Leader of BJP Ghanshyam Tiwari will lead the opposition.

Quoting Raje's resignation letter, Rathore said she would remain a "disciplined worker of the party and continue to raise public voice in the House. 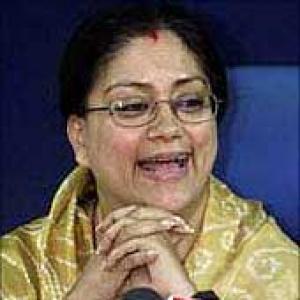