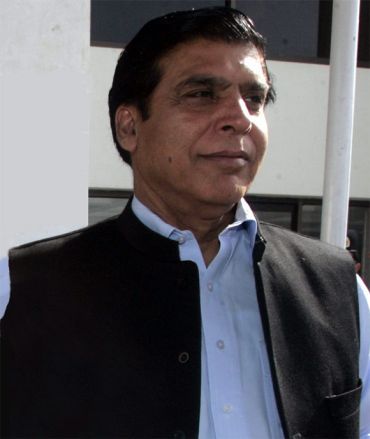 Raja Parvez Ashraf, Pakistan Peoples Party's prime minister, is a strong loyalist of the Bhutto family and hails from a royal family of Rawalpindi in Punjab.

61-year-old Ashraf, who was PPP co-chairman Asif Ali Zardari's second choice for the post of premier, became the main candidate after an arrest warrant was issued against party nominee Makhdoom Shahbuddin for alleged irregularities during his tenure as health minister.

Like Shahbuddin, Ashraf is also facing a probe by the National Accountability Court for alleged corruption in rental power projects during his tenure as water and power minister.

He was secretary-general of the PPP (Parliamentarians), a party formed in 2002 by the PPP for the purpose of complying with electoral rules governing Pakistani parties.

The party contested the 2002 elections while former prime minister Benazir Bhutto was living in self-imposed exile.

Ashraf, who was elected to the national assembly from Gujar Khan constituency in Rawalpindi district -- both in 2002 and 2008 -- served twice in the cabinet of Yousuf Raza Gillani, who was disqualified by the supreme court.

He resigned from Gilani's cabinet in February last year after allegations of corruption in power projects.

He returned to the cabinet in April this year when he was appointed minister for Information Technology.

Ashraf's candidature was backed by PML-Q, a major ally of the PPP with more than 50 seats in the national assembly.

His nomination is seen by experts as a taunt to the assertive judiciary. Ashraf's nomination might irk the supreme court, which had ordered the government to take legal action against him for alleged corruption cases.

Source: PTI© Copyright 2022 PTI. All rights reserved. Republication or redistribution of PTI content, including by framing or similar means, is expressly prohibited without the prior written consent.
Related News: Pakistan Peoples Party, Parvez Ashraf, Benazir Bhutto, supreme court, Makhdoom Shahbuddin
Print this article
PPP likely to choose for Raja Parvez Ashraf over Kaira
Last minute drama adds to confusion on who will be Pak PM
Assange fears being extradited to US for leaking secrets

High drama in Pakistan on the eve of PM's election