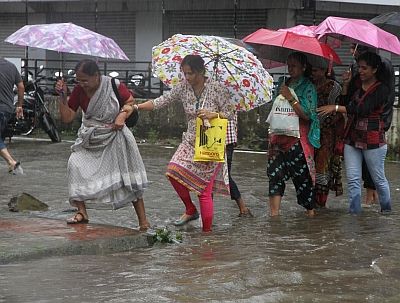 Nearly 50 villages in the district have been cut-off from the tehsil headquarters and two bridges remained submerged as heavy rains continued to lash Thane on Wednesday.

About 50 villages of Murbad and Palghar talukas have been marooned and the villagers are being shifted to safer places, disaster control room officer Jaideep Visave said. The worst hit are areas of Palghar, Vasai, Dahanu and Vikramgadh, he said.

At Manor in Palghar taluka, nearly 24 people who were stranded in a flooded resort, situated near Vaitarna river, were rescued last evening, he said.

Because of the heavy downpour, the Maswan bridge on the Palghar-Manor road was submerged since the last two days. Also, the bridge between Murbad and Rahta remained submerged leading to closure of the Murbad road.

Villages around the area have been cut-off from the outside world, Visave said.

In western part of Thane's Badlapur township, several houses were marooned and many people rendered homeless due to flooding, the official said.

Police and firemen rushed to Badlapur around midnight and carried out rescue operations. A teenaged boy had on Sunday drowned in New Shivaji Nagar lake at Kalwa where he had gone for a swim along with his friends, a civic official had earlier said.