Finance Minister Arun Jaitley on Monday described the poll promise of Congress President Rahul Gandhi to dole out Rs 72,000 each to poorest families every year as a "bluff announcement", saying no other political party has betrayed India for more than seven decades. 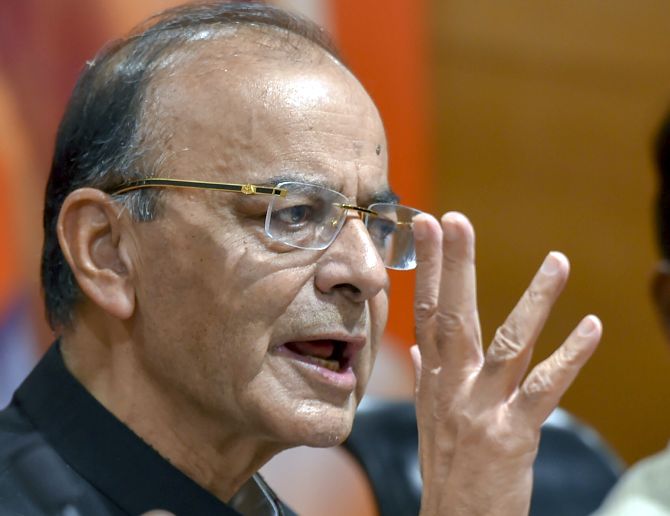 Jaitley said the Congress has given to the people many slogans but very little resources to implement its election promises.

"If the Congress party's announcement is tested on simple arithmetic, Rs 72,000 for five crore families works out to be Rs 3.6 lakh crore, which is less than 2/3rd of what is being given (by the current government) -- a bluff announcement," Jaitley said.

In a Facebook post titled 'Is Prime Minister Narendra Modi already giving to poor much more than what the Congress promises?', Jaitley said no political party has betrayed India for more than seven decades other than the Congress.

"It gave to the people of India many slogans and very little resources to implement them," he said.

Accusing the Opposition of sabotaging the pro-poor initiatives of the National Democratic Alliance government, Jaitley said, "If the Congress party and its friends have so much concern for the poor in India, why is it that its states are going slow in certifying the list of small and marginal farmers who are entitled to receiving the instalment of PM KISAN? Why are some of the States such as West Bengal, Odisha and Delhi, amongst others, not implementing the Ayushman Bharat? What is the fault of their poor farmers that they want to make them pay?"

"The simple arithmetic is if multiple bank transfers to the five crore poor families, the existing payment to which is mostly being done. The above averages Rs 1,06,800 annually as against Rs 72,000 which is the Congress now seeks to promise through the DBT mechanism," Jaitley said.

The Congress in Punjab, Madhya Pradesh, Chhattisgarh, Rajasthan and Karnataka promised a loan waiver, which too was a bluff announcement as in most places the promises have remained unfulfilled, Jaitley said.

"The party, thus, has long legacy of slogans with no resources. It has a history of bluff announcements. Karnataka so far has spent only Rs 2,600 crore, Madhya Pradesh Rs 3,000 crore and Punjab Rs 5,500 crore. The farmers are still waiting," he said.

In 1971, the then Prime Minister Indira Gandhi gave the slogan of 'Garibi Hatao', Jaitley said, adding although for two-thirds of the last 48 years her party has been in power, they left behind a legacy of poverty.

"This (Rahul Gandhi's) announcement is an admission of the fact that neither Indiraji nor her son and certainly not the UPA Government controlled by her descendants, was able to remove poverty," Jaitley said.