Congress leader Rahul Gandhi on Thursday watched the bull taming sport jallikattu, noting the animals were not getting injured as was being made out and said his visit was a message to the Centre that wants to "suppress" the Tamil culture. 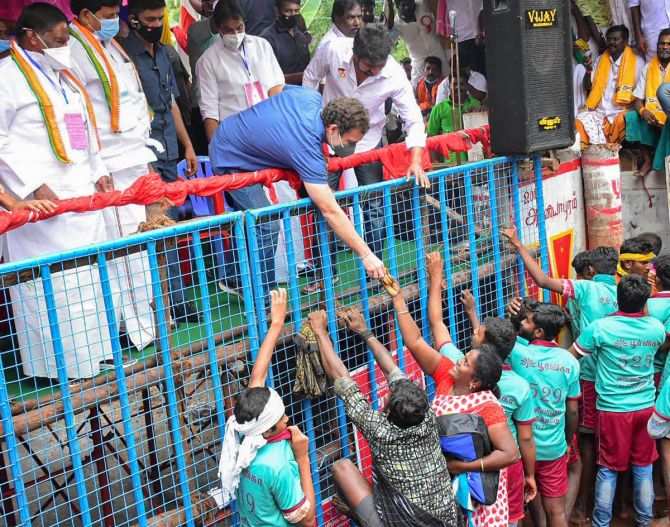 The Bharatiya Janata Party ridiculed Gandhi for his 'hypocrisy' by witnessing jallikattu and praising the sport, reminding that the Congress-led United Progressive Alliance had banned it in 2011.

Sharpening his attack against Prime Minister Narendra Modi and the National Democratic Alliance government over the three contentious farm laws which have put farmers, mainly from Punjab and Haryana on the warpath, he accused the government of "conspiring to destroy" peasants to benefit a select few businessmen.

Flanked by senior Congress leaders KC Venugopal, Puducherry Chief Minister V Narayanasamy and TNCC President K S Alagiri, Gandhi witnessed jallikattu at Avaniapuram and said his visit was aimed at sending out a message to "those who think they can run roughshod on Tamil people."

Jallikattu is held in the state, especially with much vigour in this district, coinciding with the Tamil harvest festival Pongal which heralds the auspicious Tamil month Thai.

"I came to give them a message that nobody can suppress the Tamil spirit," he told reporters at the airport before returning to Delhi.

After witnessing jallikattu he got a sense of why Tamil people appreciate it, Gandhi said.

"There was a sense. Many people had mentioned to me that jallikatu is harmful to the bulls. I witnessed it today and I must say that the way it was done there was absolutely no chance of the bull getting injured."

"In fact if it was anyone to get injured it was the young men doing jallikattu. I am happy to say that there have been some changes to make it safer for everybody," he said.

Gandhi further said he flew down from Delhi to watch the hugely popular event "because I think Tamil culture, Tamil language (and) Tamil history are essential for the future of India and need to be respected by everybody." 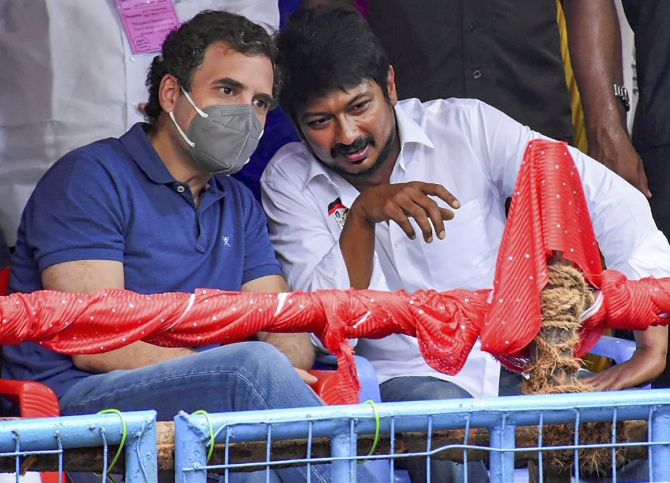 The Tamil spirit cannot be crushed, he said, adding he was 'completely' against the idea of one particular idea, language and notion.

"There are many different languages, ideas and all these contribute to our strength and that is my message," he said.

However, the BJP lashed out at the Congress leader over his visit to the temple town.

Taking a dig at Rahul's visit to Avaniyapuram, Ravi made a referrence to the UPA government banning the sport by adding bulls in the list of performing animals.

"Dear @RahulGandhi, Your Govt in 2011 labelled #Jallikattu as cruel & barbaric. Your Party manifesto
supported ban on Jallikattu. Today, you are in Tamil Nadu to watch this traditional sport live. Aren't you insulting lovely Tamil Makkal with your hypocrisy? Happy Pongal," Ravi said in a tweet.

Hitting out at the Centre on the contentious farm laws, Gandhi alleged that the government was "conspiring to destroy" the ryots and asserted that his party will stand with them.

"The government is not just neglecting them (farmers), the government is conspiring to destroy them. There is a difference. Neglecting is ignoring… they are not ignoring them," he said in response to a query.

"You are suppressing the farmers (and) helping handful of businesses," he said.

"Mark my words, these laws -- the government will be forced to take them back," he said, adding he was "proud" of what the farmers were doing (protesting against the laws).

Charging Narendra Modi with "not supporting" the common man during the coronavirus pandemic, Gandhi asked "whose prime minister are you?"

“Are you the Prime Minister of the people of India or the Prime Minster of two-three selected businessmen?" he asked.

He also sought to know why Modi was "silent" on the months long Sino-India standoff, asking "why are the Chinese people sitting inside Indian territory."

Earlier, Gandhi attended the Pongal celebrations with people of Thenpalanji village in the district and also had food with them. He took photos with local youth and interacted with some elderly people.