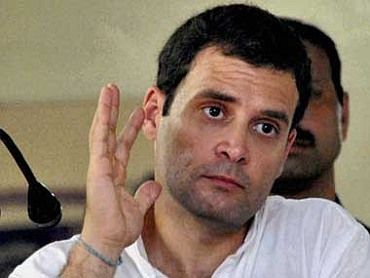 Speaking to ANI, Azam said, "Rahul thought the Youth Congress is a lab and did experiments and destroyed it," adding, that he did the same with the Congress.

Azam, who appeared to be very upset with the party leadership, said that he had been writing to Congress President Sonia Gandhi since 2005 that sycophants are ruling the roost in the party. He said that the Congress started going downhill every since Sonia made Rahul in-charge of the party.

Commenting on the landslide victory of the Bharatiya Janata Party in the recently held assembly elections, the former Congress MP asserted, "Modi's prediction was right, he has crushed the Congress. The party did not see it coming, I warned but no one listened.”

Defending Rahul, senior Congress leader Beni Prasad Verma alleged that some leaders in the party, who have contact with other political parties, are trying to sideline the Gandhi family. "Some from within the party are out to sideline the Gandhi family, especially Rahul Gandhi. Those criticising the leadership are from within the party having contact with other political parties."

Refusing to take any name, Verma said, "Everyone knows their names and faces. They are the ones who sold tickets in 2012 assembly elections, amassed huge wealth while the party was declining in the state and worked against the party in the Lok Sabha elections."

The former Union minister said those who had been praising the Congress Vice President earlier are today questioning his leadership abilities after the party's bad show at the hustings.

"Rahul is the only leader of the country and Congress who can replace Narendra Modi," Verma said, adding that he (Rahul) has deep knowledge of politics, society and economy and is above caste and religion.

Exuding confidence about Congress' return to power, Verma said Rahul would soon take stern measures to revamp the party. He said the Lok Sabha elections have pushed small and regional parties to the sidelines, which proves that national political parties would be the central players.