Rahul attacks PM on reports of Chinese village in Arunachal

Congress leader Rahul Gandhi on Tuesday hit out at Prime Minister Narendra Modi on the issue of national security after reports that China has built a village in Arunachal Pradesh, and said China needs to be given a clear message. 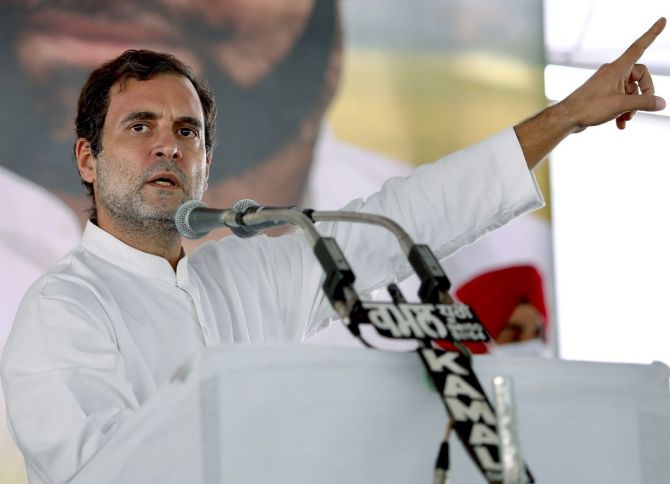 He termed the situation with China as 'very dangerous' and said India under Modi does not have any clear cut strategy on China, which is testing the country and will not sit silent.

"China is watching us and is understanding India's weaknesses and China has a clear strategic vision. They want to shape the world. India has no strategic vision. India sometimes does this or that, it is not working strategically. China has tested India twice. Once it tested in Doklam and now by putting troops in Ladakh, it is testing India and is watching.

"If India does not give a clear message to China and does not make a strategy - be it military, economic or geo-political strategy, China will not sit silent. China will take advantage of this and India will suffer loss and one will not be able to stop it," he told reporters at a press conference, when asked about the issue.

The former Congress chief said that is why he keeps repeating and raises the red flag for the government on China's plans.

"China has entered into our territory and if the government feels it can manage it through event management, it is highly mistaken," he said.

"China is different, it wants to dominate and it is working systematically. Your words are not going to make any difference. Your job is to protect India and you are not doing this and its repercussions will be seen by India.

"You cannot remain away from reality and that is why I am warning, which is my job as an opposition leader," Gandhi said.

He said China is not an event, China is a process and he studies it.

"I speak thoughtfully and I am telling you, it has turned into a very dangerous situation," he also said.

Earlier in the day, Rahul Gandhi said in a tweet, 'Remember his promise - Mai desh jhukne nahi dunga (Will not let the country bow).'

He also posted a link of a news report about the alleged 'Chinese village'.

'Modiji where is that 56-inch chest,' Surjewala tweeted.

Taking to Twitter, Tewari said, 'This is very very serious. Not troops but a whole village! For God sake.'

'@PMOIndia or @rajnathsingh Ji must tell the nation as to whether this is true or false?' he said.

In a cautious reaction to the reports, India had on Monday said it keeps a constant watch on all developments having a bearing on the country's security, and takes necessary measures to safeguard its sovereignty and territorial integrity.

Congress leader P Chidambaram had on Monday demanded answers from the government on the issue, alleging that Bharatiya Janata Party MP Tapir Gao has claimed that China has built a 100-house village in the 'disputed area' deep into Arunachal Pradesh.

India and China are locked in a bitter border standoff in eastern Ladakh for over eight months.

India and China have held several rounds of military and diplomatic talks in order to resolve the standoff, but no significant headway has been made for its resolution.