A large section within the Congress has always felt that Rahul Gandhi must come back as party chief and he remains the "top leader" in the party, senior leader Salman Khurshid said on Saturday, asserting that Gandhi should be allowed to make his decision at a time of his choice.

Khurshid also asserted that the Congress was going through a "transitional process", but there was no leadership crisis plaguing the party as Sonia Gandhi was there at the helm.

His remarks assume significance as they come after voices emerged from several quarters within the Congress on the leadership issue with many leaders, including Shashi Tharoor and Sandeep Dikshit, demanding that the matter be finally laid to rest.

Tharoor on Thursday had urged the Congress Working Committee to hold leadership elections to "energise workers and inspire voters".

Asked about Dikshit and Tharoor's views, Khurshid said, "We have had elections in the past. We have also had people say that elections are not necessarily the best thing. There are two points of view. When we get to that point, we will cross the bridge."

He said talking about such issues in the media doesn't help the Congress.

Asked if Rahul Gandhi was best suited to lead the Congress, Khurshid said, "We have all said this. It is now written in stone, it is clear. But if we accept him as our leader, let us give him the choice of decision making and the timing. Why do we want to impose (our views) on him."

On whether there was a dominant view within the Congress that Gandhi must come back as party chief after resigning last year taking moral responsibility for the Lok Sabha polls defeat, he said there has always been such a feeling in a large section of the party.

"But it was embarrassing to continue repeating it because if you do believe that he is a leader, you need to leave some decisions to him, not impose the timing, not impose the nature of the decision, let him take a decision," the former Union minister said.

"He (Gandhi) said he is not going away and he has not gone away. He is still here. If he does not have a label because he does not want to use that label today, lets respect him for it and we have done so," Khurshid said, adding that it is the media that does not stop talking about it.

Khurshid asserted that Gandhi remains the "top leader" in the party.

"He (Gandhi) remains the top leader... nobody else is the top leader. But there are other leaders who have their own significance, who contribute to the entirety of the process that the Congress party is," he said.

Khurshid said the fact that parties opposing the Congress continue to attack him more than anyone else, shows that he remains the top leader.

Asked if the Gandhi family remains the fulcrum of the Congress, he said that it is a fact which cannot be wished away.

"Nobody says, and least of all the Gandhi family says, that democratic processes should not be allowed to evolve in the party. Democratic processes are evolving in the party. But the position they hold historically, is the position that is acknowledged and accepted by huge numbers of Congress workers, that is a fact you cannot shut your eyes to," he said.

"Tell me one party that does not have dynasties. I am not saying dynasties are good, but dynasties are a fact, not just in politics, but in the media, in police, in judiciary, in Bollywood, in administration, in universities… You can't just single out one single area and say 'there should be no dynasties here'," he said.

As social mobility advances, this issue will resolve itself, he added.

Asked about the leadership conundrum, Khurshid said there was no lack of leadership in the party and asserted that there cannot be "cut and dried" or instant solutions to such matters as it takes time.

"There is no such thing as past leadership, present leadership and future leadership. There is a kind of a continuum, now in that continuum what kind of shape that the leadership structure takes from time to time will evolve. This is an evolution that is taking place. People are just uncomfortable about evolution," he said.

Khurshid said much of the discussion and debate around the leadership issue was futile and it was the media that seems to be more interested in it than Congressmen.

More importantly, what the party needs to understand is that what is it that has happened to the country and the voter that "we need to address", he said.

"We should just be left to ourselves to allow us to do what we need to do. Each one of us knows what we have to do. But no matter what we do, we would still require a change of mood in the country and some of it is now being noticed and is becoming manifest," the 67-year-old leader said.

The Congress on Friday had said there was no leadership crisis in the party as Sonia Gandhi was appointed as its chief by the CWC, the highest decision-making body of the grand old party.

Get Rediff News delivered into your Inbox.
Asim Kamal
Source: PTI© Copyright 2020 PTI. All rights reserved. Republication or redistribution of PTI content, including by framing or similar means, is expressly prohibited without the prior written consent.
SHARE THIS STORY
Print this article 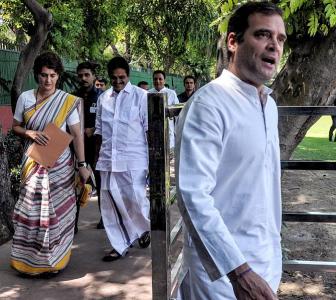 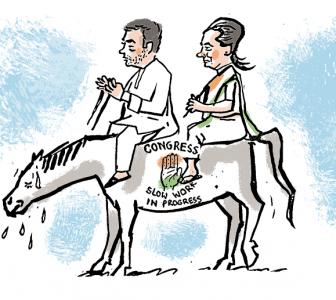 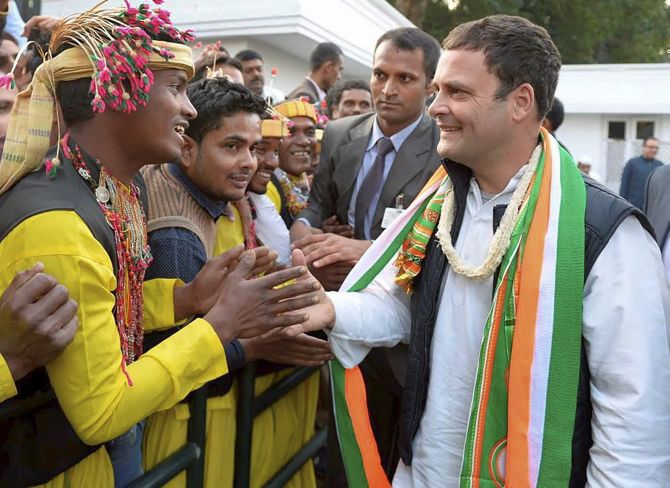