'With them': Rahul meets family of girl raped, killed in Delhi

Congress leader Rahul Gandhi on Wednesday met the family of the nine-year-old Dalit girl who died in Delhi following an alleged sexual assault and asserted that he was with them on the path to justice. 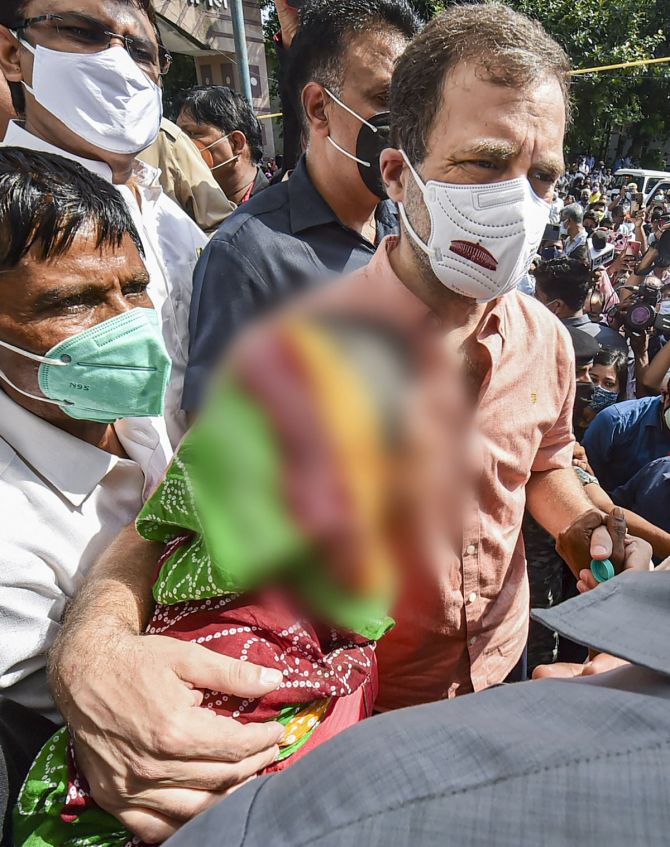 "It is my job to help them," Gandhi said as he met the girl's parents.

Later, in a tweet in Hindi, the former Congress chief said, "Her parents' tears are saying only one thing - their daughter, the daughter of this country, deserves justice. And I am with them on this path to justice."

The Delhi Commission for Women has launched an inquiry into the incident that took place in Old Nangal area in southwest Delhi and summoned the city police after the girl's parents alleged that she was raped and her body was forcibly cremated by a crematorium priest who had falsely claimed that she was electrocuted. On Tuesday, opposition parties targeted Union Home Minister Amit Shah over the incident, questioning the law and order situation in the national capital, even as the Delhi Police said strict legal action has been taken against the accused.

Gandhi had also tweeted on Tuesday about the incident, saying a Dalit's daughter is also the daughter of the country.

IMAGES: Congress leader Rahul Gandhi meets the family members of the minor girl who was allegedly raped and then murdered in Delhi cantt area, in New Delhi. Photograph: Arun Sharma/PTI Photos
© Copyright 2021 PTI. All rights reserved. Republication or redistribution of PTI content, including by framing or similar means, is expressly prohibited without the prior written consent.