Rahul may come out of his shell to take on Modi 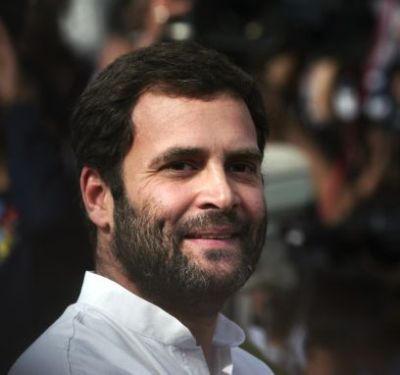 Congress circles are abuzz with reports that the Nehru-Gandhi scion is planning to come out of his self-imposed isolation and talk to the press, an event which would automatically convert the 2014 Lok Sabha into a contest between Rahul and Modi.

Rahul Gandhi is not particularly accessible to the Delhi media though he does interact with the press during his tours to the states.

Congress publicity managers have adopted this strategy for two chief reasons: one, they don’t want Rahul Gandhi to be “over exposed” and lose his mystique which they have created around him. Two, they don’t want his statements to trigger unnecessary controversies

Rahul Gandhi addressed his first press conference in Delhi in the midst of the 2009 Lok Sabha election campaign and at Varanasi during the Uttar Pradesh assembly polls. He has consistently maintained that he is not obsessed with the prime minister’s post and that his top priority is to strengthen the Congress organisation.

Athough discussions about the proposed press conference are at a preliminary stage, there is a section in the Congress which wants Rahul Gandhi to be seen and heard more frequently, especially since Modi is grabbing eyeballs with his nation-wide tour.

This section believes that instead of constantly reacting to Modi’s public statements, the Congress should be setting the agenda and Rahul Gandhi should be at the helm.

However, there is another suggestion that instead of addressing the media where Rahul Gandhi could face uncomfortable questions, the Congress vice-president should instead speak at public rallies or address smaller audiences like Modi.

The Gujarat strongman forced the Congress to react when he accused the grand old party of “hiding behind a burqa of secularism” while coming down heavily on the United Progressive Alliance government for the current economic mess and poor governance.

Congress communications chief Ajay Maken and Information and Broadcasting Minister Manish Tewari were quick to put down Modi by punching holes in his claims about his Guajrat model of development.

Rahul Gandhi had last taken on Modi during the Gujarat assembly polls and subsequently in his address to the CII members where he had declared that the country’s problems could not be solved by a knight on a white horse.

Hitting back at Modi, the Congress had said that “the veil of secularism was better than the nakedness of communalism”.

This war of words has all the making of setting the stage for a communal-secular polarisation in the run-up to the next general election.

It is being felt that instead of party spokespersons doing the talking all the time, it would be good strategy for Rahul Gandhi to speak up occasionally as it would have greater impact.

Rahul Gandhi will have to step out now that the next Lok Sabha election is less than a year away, they said.

In fact, Maharashtra Chief Minister Prithviraj Chavan had recently told Rediff.com that the BJP would not succeed in making the 2014 Lok Sabha election into a presidential-style contest as the electorate votes for an individual MP in his state and constituency in a parliamentary democracy.

If the tone and tenor of the ongoing political discourse is any indication, the forthcoming election will inadvertently be perceived as a battle between Modi and Rahul Gandhi while development issues will be relegated to the background and the communal-secular debate will prevail.

In such a scenario, Congress insiders said, it was important that Rahul Gandhi’s secular credentials are adequately showcased and that he should be perceived to be leading the fight against communal forces.