In Punjab, Rahul censures Pitroda; seeks action against guilty of '84 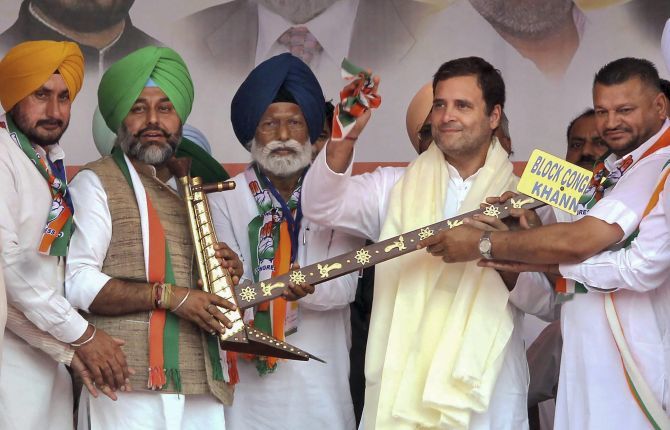 IMAGE: Congress president Rahul Gandhi is felicitated by party's candidate from Fatehgarh Sahib, Amar Singh, and others during a public meeting ahead of the last phase of Lok Sabha elections, at Gaggar Majra village, Khanna, in Ludhiana district, on Monday. Photograph: PTI Photo

Facing a mounting attack from the Bharatiya Janata Party, Congress chief Rahul Gandhi on Monday said those involved in the 1984 anti-Sikh riots should be punished, even as he again rebuked his party leader Sam Pitroda, saying he should be 'ashamed' of his remarks on the tragic event.

Addressing a poll rally in Hoshiarpur, Gandhi said that what happened in 1984 was very wrong.

"Pain, which is there in people's hearts, you (Pitroda) should respect that, and those who committed wrongs in 1984 (riots), there should be action against them and action will be taken."

Earlier, at his rally at Khanna, which was his first rally in Punjab, he also said that his party's overseas unit chief should apologise to the country for his 'totally' wrong remarks.

The Congress president's remarks came in an apparent damage control exercise after an uproar over Pitroda's 'hua to hua' response to a query on the riots.

The Congress chief had earlier tweeted his disapproval and the party had distanced himself from Pitroda's remarks.

"What Sam Pitroda said about 1984 was totally wrong and he should seek an apology from the country.

"I am saying this publicly and I also told the same to him over phone. Pitroda ji, what you had said was completely wrong and you should be ashamed of yourself. You should seek a public apology," Gandhi said towards the end of his speech in Khanna.

The BJP stepped up offensive against the Congress over Pitroda's remarks as the 1984 riots is an emotive issue in Punjab which is going to poll on May 19.

While Modi and the BJP had cheated the people of India with their 'lies and false propaganda', the Congress always remained true to its promises, he claimed.

"This chowkidar has been exposed, the people know the truth about him and he can no longer escape for perpetrating the theft of their hard-earned money with demonetisation and GST, and for diverting Rs 30,000 crore to a businessman with the Rafale defence deal," Gandhi alleged.

He claimed that the people would not forgive Modi for standing as a 'mute spectator' when Dalits and minorities were being attacked, youths were being 'deprived' of jobs and scholarships, and when farmers were 'committing suicide' or were being thrown behind bars, Gandhi said.

The prime minister looted the common people, through 'ill-conceived' demonetisation and 'Gabbar Singh Tax' and gave their hard-earned money to a few businessmen, he said, adding that Modi was now 'scared' of even debating with him on issues of corruption and Rafale as he had no answers.

Gandhi accused Modi of not raising the issue of unemployment.

"The youths are angry, so are traders, middle and small-business owners and farmers, but he did not want to touch these issues," he said.

"Look at Modi's face, he has accepted defeat. He will talk about radar (referring to Modi's reported comments on cloud cover) and eating mangoes, but he is not talking about real issues," he said.

Meanwhile, Prime Minister Narendra Modi stepped up his attack on the Congress over the issue of 1984 anti-Sikh riots, saying Rahul Gandhi should be ashamed of himself rather than reprimanding Sam Pitroda for his remarks.

"Congress is struggling to win 50 seats because the Congress leader is confused and their thinking is diffused," Modi while launching a scathing attack on the grand old party in his poll rally in Bathinda.

He said the opposition party's arrogance was at its peak.

Slamming the Congress president over the issue of 1984 anti-Sikh riots, Modi said he should be 'ashamed' of himself rather than 'pretending' as if he is scolding Sam Pitroda for the comments.

Modi said: "Namdaar (dynast) should be ashamed of himself for failing to get justice to victim of 1984 riots," adding those involved in the genocide would not be spared.

"Today I want to ask Congress how long they will rub salt into wounds like this," said Modi while referring to Pitroda's 'hua to hua' remark.

He was addressing a poll rally in Bathinda from where union minister Harsimrat Kaur Badal is seeking re-election.

Polling to the 13 Lok Sabha seats in Punjab will be held on May 19. 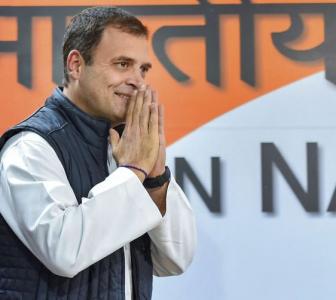